A journey into Jewish Sicily: an amazing tour throught Sicily region peopled by many conquerors and peaceful Jewish!

The island of Sicily is one of the Mediterranean’s greatest pleasures.

Sicily, the object of desire of many conquerors throughout history, a strategic location between three continents, attracted many kingdoms.

Greece and Rome fought Carthage for control here and won; Byzantium. The Muslims were also here in the 10th and 11th centuries. The Normans and after them the Holy Roman Empire, France, Spain, and others.

Before the unification of Italy –in 1861– Sicily was under the control of the House of Bourbon in Naples as part of the Kingdom of the Two Sicilies.

Jews were here, as well; some 30,000 before they were expelled from the island in the 1494 as part of the expulsion of the Jews during the Spanish Inquisition.

We are here to help you to choose!

Our jouney starts in Siracusa, founded by Greeks around 734 B.C.
Siracusa, the southeastern Sicilian city that Cicero called “the greatest and most beautiful of all Grecian cities” achieved a size and status in the ancient world that made it a rival of major powers like Athens and Carthage.

Takeovers and makeovers by Romans, Byzantines, North Africans, Normans and others left their marks as well, influencing everything from religious art to the region’s distinctive savory-sweet-sour cooking style. Much of the ancient city has crumbled since Cicero’s day, though the ruins can still be explored in Syracuse’s celebrated Archaeological Park. 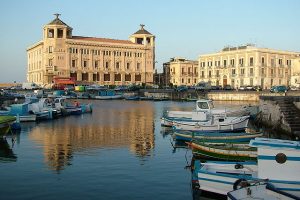 But the main attraction today is the historical center of Syracuse: Ortygia. A small island connected by small bridges. It  remains Syracuse’s most beautiful corner, a deeply atmospheric quarter with an ever-growing legion of fans enamoured with its beautiful streetscapes and attractive dining, drinking and shopping options. 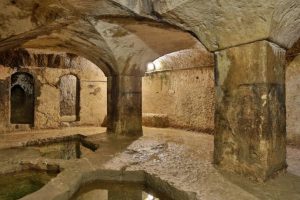 Jews lived here as well, for more than 1,500 years,  in the city of Syracusa –the second largest community on the island after Palermo, the capital– until they were expelled on the orders of Ferdinand and Isabella along with the rest of the Jews of Sicily.

Today we walk up the Road of the Jews, which has retained its Italian name, Via Della Giudecca to  join a hotel where there was a very moving find: the Mikveh, a beautiful Jewish ritual baths from the ninth century!

The ritual baths were discovered by chance when the owner of the hotel —Amalia Daniele— wanted to restore it and discovered a vault that has been sealed off and filled up with dirt. It took more than 150 trucks to remove all the earth until at the bottom of a staircase five ritual baths that received their waters from the spring below were discovered.

This is a very important site for the Jews community since ritual baths mean Jewish life: families and love and children that were born and life that went on there for hundreds of years until being cut short by the expulsion.

Today we drive to the countryside of Sicily and join Agrigento to visit the finest of all ancient Greek sites—the complete Doric Temples, one of Sicily’s most famous historical attractions. 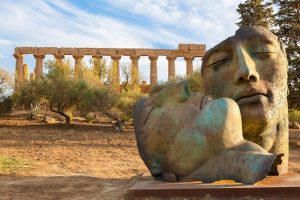 This is one of the most outstanding examples of Greater Greece art and architecture, and is one of the main attractions of Sicily as well as a national monument of Italy.

The area was included in the UNESCO Heritage Site list in 1997.

Founded as a Greek colony in the 6th century B.C., Agrigento became one of the leading cities in the Mediterranean world. Its supremacy and pride are demonstrated by the remains of the magnificent Doric temples that dominate the ancient town, much of which still lies intact under today’s fields and orchards.

And now we are on the final day of our visit: Palermo, Street Food and Jewish Heritage! 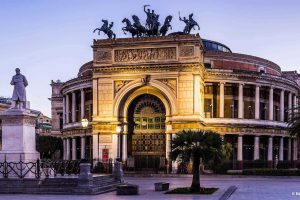 historical archives, where there are documents from the 13th century. A glass cabinet in the heart of the hall presents the protocols of the Sicilian Senate from 1492 with the decree to deport the Jews of the island, translated from Spanish to Sicilian.

Palermo, the capital of Sicily is also the location where Spanish arrived and started their Inquisition and Jews’s expulsion.

If you have the chance to open the book, open exactly to the edict of expulsion, and thoughts about the fate of milion of people forced to leave a location, their home, their friends. The events of recent weeks in Ukraine, two years world-stopped for covid also resonated. How fragile our lives are. The Jews were here for more than 1,000 years and are gone away for nothing and only due to wickedness and envy of some people, as well as economic topics.

STEP into the Steri Palace and you are immediately plunged into the abyss of one of history’s most blood-soaked episodes – one which saw Jews persecuted, tortured and publicly burnt at the stake. 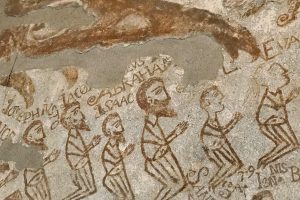 Known also as the Palazzo Chiaramonte, the intimidating Steri Palace functioned as the headquarters of the Spanish Inquisition in Sicily’s capital of Palermo from 1601 to 1782. A chilling testament to yet another of the horrendous chapters of the Jewish story.

Enter its cells where Jews and the many others whom the Inquisition regarded as heretics were imprisoned and you cannot but go cold as a remarkably detailed etching of Jerusalem pleads with you to pause and reflect on the tormented souls who were there before you. Pore over maps of the Sicilian towns of Siracusa, Trapani, Agira, Siculiana, Cefalu and Palermo, and if you look hard enough you will find a street named Via Della Giudecca – the Street of the Jewish Quarter – or a variation thereof, indicating the former existence of what was once a vibrant and bustling Jewish Quarter.

What did the Jews bring to Sicily? 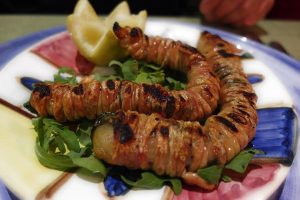 Sicilian food is the original fusion cuisine, a unique mix of all of its diverse cultural heritages.

The island has been at the heart of thirteen different empires over the last three millennia, and each one of them has left its mark on the Sicilian Gastronomy.

The Jews didn’t invade Sicily so nobody knows when they first showed up; but they were translators, interpreters and scribes for a succession of governments, and probably controlled the show throughout.

Whilst various invaders debated kicking the Jews out, nobody went through with it because they simply couldn’t govern this multi-lingual society without them.

Palermo in particular is famous for its offal dishes. Much Sicilian street food is offal based, and the tradition arose from the Jews who, ironically, do not eat it.

Their charitable donations to the impoverished citizens of Palermo, of the animals parts their religion forbade, kept a great many families alive. This led to the imaginative use of the nutritious ingredients available to them which are kept alive in SIcily’s legendary street foods. 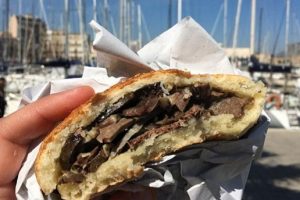 Spleen Sandwich (Panino con la Milza), Stigghiole and Frittola
The immortal Sicilian spleen sandwich was a gift of the Jews, as was the frittola and stigghiola, a roast sheep’s intestine kebab.

Oddly enough, the Jews also taught the Sicilians their word for junk food. Sicilians call anything bad for you, that you really shouldn’t eat, a “porcheria“. When you translate this literally, it means “a pig-based food product”.

In conclusion to complete the day: enjoy the Palermo Street Food to indulge your senses in the Peoples of Sicily, Jews Heritage and a mix of different Culinary Traditions.