Medium-Easy level excursion or tour on off-road trails with long challenging uphill parts and short technical uphill and downhill sections. Suitable for fit cyclists who have done similar trails in the past. Bike Level Details are shown here

SMALL SIZE TOUR UP TO 12 PEOPLE

What to wear and bring with you:

Welcome to the warm, beautiful and pleasant island of Sicily! Upon arrival at Palermo Airport please proceed through the Passport Control and collect your luggage inside the customs area. Then meet the driver showing a sign with your name and a short drive takes you to Trapani.

Tonight meet the biking-tour-guide for a briefing and tour explanation.

Today we enjoy a very relaxed bike experience from Trapani to Marsala Salt Way Road, skirting the lagoon to see the snow-capped mountains but hills of salt, one of the Sicilian economy's historical resources that was already very precious in the days of the Phoenicians, who were the first to bring some form of technology to its production. The favourable climatic circumstances, such as high temperatures and a wind that increases evaporation, plus the shallowness of the water, contribute to create the evocative and unreal scenario created by the salt flats, which form a sort of immense chessboard that ranges in colour from off-green to pink. The tourist paths for visits to the salt flats wind their way around the great basins and, running along the edges of the tanks of seawater - which glistens in the sun as it crystallizes - finally reach the mounds of salt. These mounds are topped by a series of recently restored windmills that recall the days when they were among the main instruments for pumping the water and grinding the salt. A panorama that has to be enjoyed, preferably at sunset, when everything becomes tinged with red.

We then arrive at the salt pans Saline Ettore Infersa (Admission fee: non included) which offer a truly unique landscape. Windmills, first introduced during mediaeval times, dot the horizon, a testament to how things were once done, though one or two continue to function, pumping water through the sluice gates into or out of the various basins. Piles of harvested salt, neatly covered with terracotta tiles, lie between the road and the basins waiting to be despatched.

In the early afternoon we join a Marsala winery to visit to the cellars, wine tastings and snack.

Then, time at leisure to explore Marsala to see where the famous Landing of Thousand did take seat with legendary arrival of Giuseppe Garibaldi in Sicily, one of the most iconic episodes in Italian history, which represented the beginning of a path that would later lead to the unification of Italy. From that moment, Marsala is for everyone the city of the Landing, among other things, still remembering that episode of the Expedition of the Thousand with memorial, able to tell the importance of the heroic deed made by Garibaldi and his Thousand.

Tonight dinner in a local trattoria to enjoy local dishes and the famous Busiate, a type of long macaroni, originally from this area of Sicily. They take their name from busa, the Sicilian word for the stem of Ampelodesmos mauritanicus, a local grass, which is used in preparing them and giving them their helical shape. The focus of our dinner is with Busiate with Trapani Pesto, a delicious Sicilian pasta dish made with fresh tomatoes, basil, garlic, pinoli and extra-virgin olive oil. The province of Trapani, and Marsala as well, is famous for this delicious pasta recipe.
Day 3
(Tuesday) Marsala > Mazara del Vallo
Bike Ride: approx. 27 km
Elevation Gain: negligeable
Route Features: 100% flat (100% asphalt)
Bike Activity Level: read more>
Bike Day Route Level:

After breakfast, we will proceed towards Mazara del Vallo, riding along coastal roads and back roads, winding between vineyards and olive groves taking some short stops along the way.

This afternoon is dedicated to the visit of Mazara del Vallo which is famous for integrating Arab and Sicilian communities through fishing (its fleet of fishing vessels is the third largest navy in Europe). Visit the Casbah, the old Arab quarter, guests  many houses in typical Arab style and it is crossed by an endless series of small tunnels. The neighborhood is inhabited by a large Tunisian community, which helps keeping intact the overall style of the neighborhood: some typical elements are the tiles and other decorative elements on the facades of houses.

Tonight dinner in a local trattoria. Today the focus of our dinner is Fish soup and Cous-Cous.

Sicilian cuisine is very diverse, as it has been influenced by the many cultures that visited its wonderful land in ancient times. CousCous is a very important example. Traditional Moroccan dish, but while in the African coast it is prepared with meat and vegetables, in Sicily it is seasoned with fresh fish caught in the Mediterranean Sea.

Back on the bicycles, riding along a beautiful coastal road, we will head towards Capo Granitola. The area overlooks the sea and at the same time with its gardens, vineyards and ornamental trees it is well integrated into the surrounding nature, which makes it even more fascinating. But be careful not to be misled, the beauty of this place lies precisely in this peculiarity, which gives you the opportunity to totally immerse yourself in the local reality and culture.

We then continue onto Cave di Cusa-Cusa Quarries. It was 409BC when some unnerving news arrived at the stone quarry of Cusa: an immense Carthaginian fleet had been sighted sailing towards nearby Selinunte. War was certain. The workers downed tools and fled, not knowing if they would ever return to complete their work. Both history and the quarries themselves tell us they didn't. Half-cut column sections remain attached to the mother stone, others lie strewn amongst the grass or in the surrounding olive orchards, awaiting in vain to be consigned.

All has remained exactly as it was on that fateful day in 409BC, making the Cave di Cusa one of the most fascinating spots in Sicily.

Don't miss it and don't forget to take a picnic!

This afternoon we join the Archaeological Park of Selinunte (Admission fee: not included) sitting on a high plain and overlooking the sea. It is flanked on either side by golden beaches and, being almost 1km wide, is an excellent excuse for a good walk.

Today our bike experience takes us from the archaeology areao to the sea, then to the hill and breathtaking views, unspoiled nature … Sicily offers many areas of interest, ideal to discover and explore by bicycle.

A territory designed for experiential tourism, that brings out the sky with its colors, the countryside with its soft hills and its typical products. The sea with its horizon and its smells, where to defy the sirocco wind that blows from nearby Africa. In this point of Sicily dominate unchallenged reeds, sand dunes, dwarf palms, olive groves and vineyards. Where the sea laps expanses of fiery sands or rages on low cliffs.

Bike onto the Menfishire, that haven of vineyard-carpeted hills sloping down to crystalline-sea-lapped sandy beaches, has redefined the term “riding the rails”. Where a narrow gauge freight railway once ran, connecting Menfi to Sciacca, there are now 20km of cycle paths, allowing locals and visitors alike to pedal (or run) through the area’s gorgeous landscapes without worrying about traffic. It’s an ideal way to discover the area and you can even stop off for a swim in the waters of the Mediterranean to cool off.

Running virtually due south, the cycle path from Menfi to Sciacca-San Marco is about 13.5km long and runs along paths, sections of the old railway line and a short stretch of road (the last 100m). Along the way, at the bottom of the descent from Menfi (which is about 100m above sea level), is a beach, the ideal reward for your efforts.

Drop off the bike, time at leisure, then a short bike ride to join the hotel.

Tonight we gather for a Farewell Dinner at hotel.
Day 6
(Friday) Sciacca END
Breakfast at hotel.

END of our services and Arrivederci Sicilia!

Contact us for more information
Thanks for sending your request.
We have sent an email to your email address, check your inbox or spam.
An error occurred.
Please check all fields. 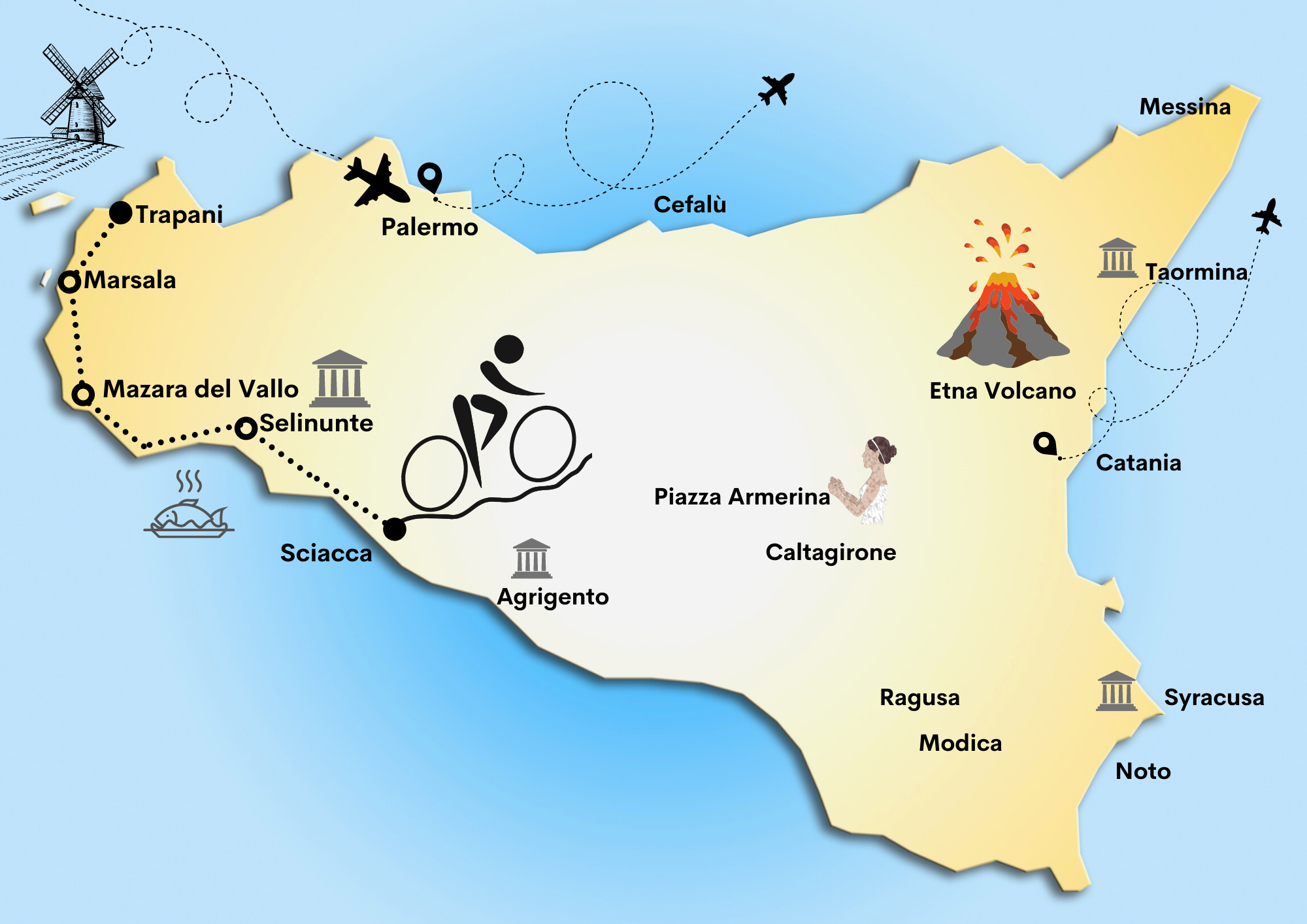