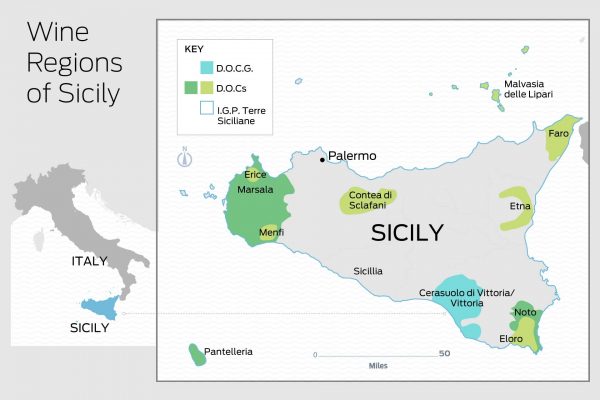 Sicily, the largest island in the Mediterranean Sea, served as a crossroads for ancient civilizations. Today, it boasts one of Europe’s most dynamic wine industries. Though a part of Italy, Sicily’s breadth of landscapes approximates a small country itself. Get to know the history, grapes and regions of this sunny isle. 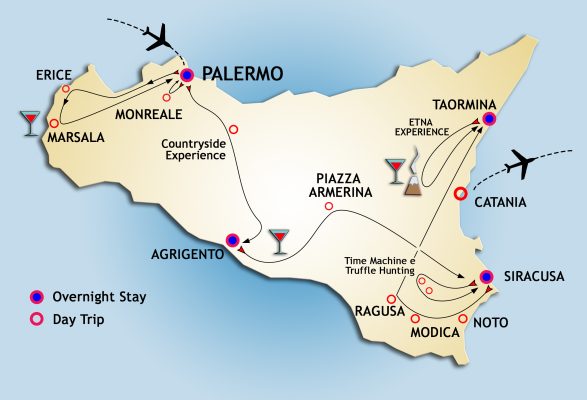 Food and Wine – Grand Tour of Sicily
This Food and Wine Tour of Sicily is a 10 days private tour, ground services only arranged hiring an English-speaking driver who will lead you to the discovery of Sicily’s excellent food and wine while visiting the most enchanting spots of the island.
Is a combo of winery, wine tastings, gastronomy and we will indulge you to have amazing meal experience in villages off the beaten track. This is the trip which will fit into your heart!
CONTACT US FOR MORE INFORMATION

The Greeks, Phoenicians, Arabs and Italians have all held sway over Sicily. Though the Greeks brought their advanced viticulture techniques, Sicilians have been making wine since 4000 BC. Its dry, warm climate features regular sunshine and moderate rainfall that suits wine production. Arid conditions reduce the chance of rot and mildew, especially in areas kissed with coastal breezes. This makes Sicily a prime candidate for organic farming. Olives, citrus and grains drive the agricultural sector beyond wine.

In the past, however, farmers opted for higher yields, which turned Sicily into a bulk wine center. They distributed to mainland Europe to boost thin wines, as well as to China and India, who imported concentrated Sicilian must to sweeten foods.

Heritage regions like Marsala did put Sicilian wine on the map. Wine traditions in each of the island’s regions, from Vittoria to Mount Etna, have remained strong. In the 1980s, a resurgence in interest brought improvements in viticulture and winemaking. Today, Sicily turns out some of the most exciting labels in Italy.

Historically, Italian wine regions have clung tightly to its historical grapes, and Sicily is no different. While international varieties are prominent players, for critics, sommeliers, and importers, the wines they dream about at night are indigenous.

Nero d’Avola is the most widely planted and celebrated red grape. If you find a Sicilian wine in your supermarket, it will likely be Nero d’Avola. It yields wines of deep color and flavor, with moderate structure, juicy acidity and soft-to-medium tannins. Flavors of dark, brambly fruit and spice are common. Stylistically, the wines can range from youthful and easygoing to serious and contemplative, with the latter requiring time in bottle for best enjoyment. Nero d’Avola is the primary grape in the Cerasuolo di Vittoria Denominazione di Origine Controllata e Garantita (DOCG), an appellation in the south, where it’s partnered with Frappato.

Frappato, though blended typically, can also be bottled on its own. Once relatively obscure to American wine lovers, the grape has gained fans among sommeliers who wax poetic over its captivating floral perfume. These lean toward easy-drinking wines with supple tannins, though earnest examples exist.

Nerello Mascalese may rank second in volume and value to Nero d’Avola, but this elegant red has engendered a passionate following over the last 20 years. The grape thrives in the volcanic soils of Mount Etna, and it’s often blended with Nerello Cappuccio, a rustic, spicy grape.

For white wines, Catarratto is the most planted grape in Sicily. Catarratto makes delicious soft, dry wines, but it’s often treated as a volume variety, with much of it sent to the mainland or exported as concentrated must.

In addition to Catarratto, Grillo and Inzolia are used in the base blend for Marsala, which forms a large percentage of the island’s white wine production. Grillo, on its own, is a medium-bodied, dry white accented with a white peach flavor. It makes charming, easy wines throughout the island.

On Mount Etna, Carricante is the primary variety behind the white wines that are sometimes referred to as Etna Bianco. It’s dry and medium-bodied with zippy acidity.

In the international camp, Chardonnay, Syrah and Cabernet Sauvignon are the most successful grapes.

Sicily has 23 Denominazioni di Origine (DOC), and one DOCG and can be divided broadly into four geographical regions. But core grapes overlap across the all the areas, including the region-wide Terre Siciliane Indicazione Geografica Tipica (IGT) and catchall Sicilia DOC categories. Here are the three major regions to know.

Sicilia DOC is a broad, island-wide appellation. It launched in 2011 by a consortium of wine producers who promoted the Sicilia IGT to a DOC. The dozens of wineries participating in the appellation agreed to work in tandem to promote Sicily’s native grapes like Grillo, Nero d’Avola, Frappato and Catarratto as well as the lesser known Inzolia, Grecanico and Perricone. Though, international varieties like Chardonnay and Cabernet Sauvignon, are, in fact, allowed.

Since wines within this denomination can be made all over the island, the DOC is more a marketing tool to promote Sicily abroad and help familiarize consumers with the range of wines. To earn the designation, viticulture and winemaking must adhere to quality control practices laid out by the DOC’s regulations.

“Mama Etna,” the snow-capped, smoking behemoth in the northeast, earned its nickname for the bounty it provides local communities. Fluorescent-green pistachios, ruby-red strawberries and wine comprise much of the farming income here. More than any other swath of Sicily, Mount Etna’s wines have earned lavish attention over the last few years.

The region’s climate is quite different from elsewhere. It’s practically alpine with intense sunlight, yet it receives twice the rainfall of other regions. The mountain’s unique wines earned DOC recognition in 1968. Producers now seek DOCG status, but they’ve yet to receive it.

Etna’s main grapes are Nerello Mascalese for red and Carricante for white. The former has been compared to both Barolo (Nebbiolo) and red Burgundy (Pinot Noir) for its transmission of terroir, depending where it’s grown on the mountain.

At warmer, lower altitudes, Nerello manifests as burly and tannic. As elevations climb up to 3,600 feet, where acidity increases and temperatures fall, wines turn taut and ethereal. Soil variation further alters flavor, concentration and texture. It’s a wine for those who appreciate singularity and vintage variation over consistency.

Carricante is a dry, bracing, mineral-laced white. It provides an accessible counterpoint, both in taste and price, to the mountain’s moodier, brooding reds. Many producers make textured wines through different techniques in the cellar, from barrel-aging to lees stirring, in addition to the clean bright wines gleaned from stainless steel.

Carricante may be blended with other local white gapes like Catarratto, but it’s often bottled by itself. Examples often display notes of citrus, anise and honey, with a swirl of saline found throughout.

Etna’s unusual grapes are only part of the story. Another piece is the stone terraces that follow old lava flows to create contrade, or crus. The system is likened to the fastidiously delineated vineyards of Burgundy, which are organized by landscape and whose soil composition creates nuances in the final wines.

Cerasuolo di Vittoria is a red wine blend that earned DOCG status in 2005. Nero d’Avola must comprise between 50%–70% of the base, with the balance filled by Frappato. The Nero d’Avola brings color, structure and depth to the final blend, while Frappato offers aromatics and freshness. Wines brim with red berries like strawberry and cherry (cerasuolo means cherry), underscored by hints of licorice and leather. Overall, Cerasuolo di Vittoria is a wine of finesse. Cellar-worthy versions tend to have more Nero d’Avola.

There are two quality categories of Cerasuolo di Vittoria: regular, known as rosso, and classico. The former must be aged approximately eight months, while the latter, which must be made from grapes grown in the traditional zone, needs to be aged at least 18 months.

The city of Marsala sits in Sicily’s southwest corner and has suffered a half-century’s worth of quality problems, but this historic port has clawed its way back to wine prominence. The base grapes of its famous fortified wines have moved away from Inzolia and Catarratto in favor of better quality and more traditional Grillo. Made in a method similar to Sherry, the key to great Marsala is time in the blending system known as a solera.

Not all Marsalas are overly sweet, see extended aging or are made with white grapes. In fact, 10 varieties are permitted, which include the red grapes of Nerello Mascalese and Nero d’Avola.

Color and residual sugar are also noted on the bottle. Hues are split into oro (gold), ambra (amber) and rubino (ruby), while for sugar content, categories are secco (dry at 40g/L, or grams per liter), semisecco (semi-sweet at 40–100g/L) and dolce (sweet at more than 100g/L).

Marsala makes a great cooking wine, as it lends nutty richness to sauces. But only use wines you’d be happy to sip.