Stories and mysteries of the Holy Inquisition in Palermo

Stories and mysteries of the Holy Inquisition in Palermo 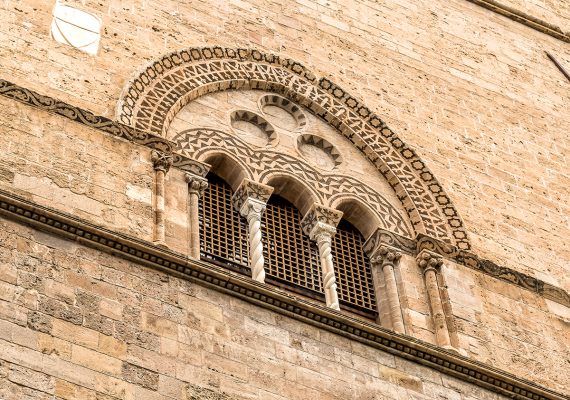 Piazza Marina is one of the largest squares in Palermo. It was build on the southern side of the natural harbour of the city.

In the middle of the square of Piazza Marina is the beautiful Giardino Garibaldi, planted with many Ficus magnolioides, which among the biggest in Europe.

The garden is surrounded by an iron fence, finely decorated with animals and arrows. 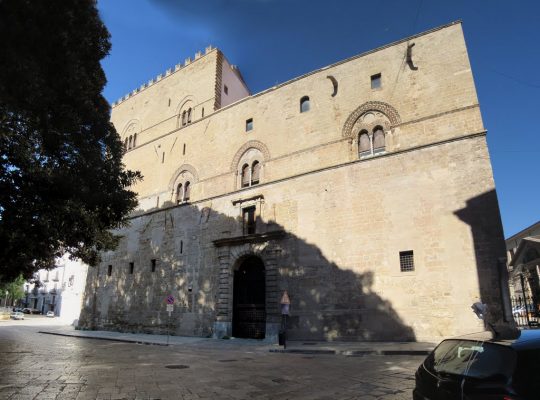 Let me say, the most famous buildings of Piazza Marina is Palazzo Steri or Chiaramonte, built in 1307 by one of the most powerful families in Sicily.

At that time the Chiaramonte family owned many territories all over Sicily.

The palace was built in the Gothic style with Arab and Norman influences, but with a plain façade.

When the new Aragonese government arrived in Palermo, in 1392, Andrea Chiaramonte was charged with treason and beheaded right in front of his palace. The Aragonese kings and the viceroys used the palace as seat of their power.

In the 17th century Palazzo Chiaramonte Steri housed the Spanish Inquisition, where suspected heretics were tortured and interrogated.

For almost 200 years Sicily lived one of the darkest pages of history, as did many parts of Mediterranean Europe; an execrable “added value” of what was already an oppressive domination at the time: the Spanish Inquisition.

In its quest to “keep the faith”, it inflicted the most gruesome forms of torture conceived by deranged human minds, and in Palermo, these were practiced in and around the Palazzo Steri, which became the Inquisition tribunal and seat. 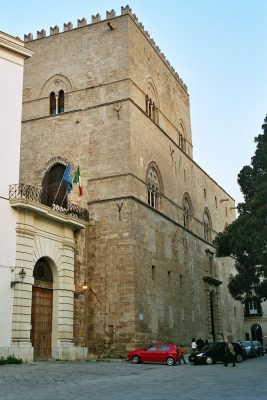 The palace itself, oddly enough, was already the theater of sanguinary transitions of power: built by and belonging to the powerful Chiaramonte family in the early 1300s, the last heir was decapitated by Spanish troops just outside the main entrance.
It was in this lugubrious environment therefore that the setting became almost natural for the inhumane sentences that were carried out.
People of all races and creeds who spoke all the known vernaculars of the time and who still populated the island well beyond the decree of Ferdinand and Isabella were literally swept off the streets when accused of, or even merely suspected of committing, dubious crimes against the church.
Packed into minuscule cells, they somehow found a way to express their fears, their anger, their despair – and, in some bizarre instances of Inquisition Stockholm Syndrome, expressions of unwavering faith to the church – through etchings and graffitis that “decorated” the detention cells.

All manner of materials were used, from blood to excrements to smuggled coal.

Miraculously, as a testament to the gruesome ambiance that was the Steri Palace, many of these graffitis have remained intact, serving as vivid reminders of the horror and ignorance of the past and as proof of how the Inquisition made no distinction about whom it put on trail. 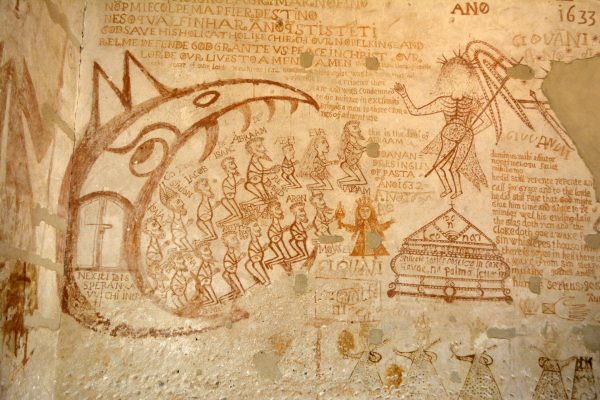 The Museum of the Holy Inquisition is situated in the “Penitenziati” prison right next to the Palazzo Chiaramonte. It exhibits the prisoners’ drawings on the wall in their prison cells. 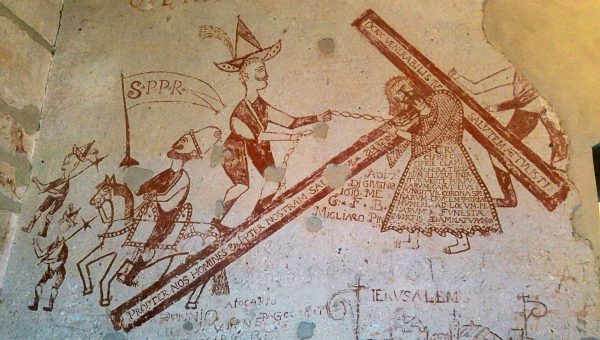 The Museum of the Holy Inquisition was built 1603-1605 because the “Philippine Prisons” inside the Chiaramonte Palace weren’t big enough to hold the growing number of prisoners.

When the Holy Office was closed in 1782, all the instruments of torture and all documents were burnt by the viceroy Caracciolo.

The prisoner’s drawings on the wall were covered by plaster in the 19th century when the building became Criminal Court and archive.

In 1906 the famous anthropologist Giuseppe Pitrè discovered prisoners drawings in three cells. In 2005 restoration work started, uncovering 10 prison cells covered with with drawings made by the prisoners.

Sicilian Jews and the Holy Inquisition 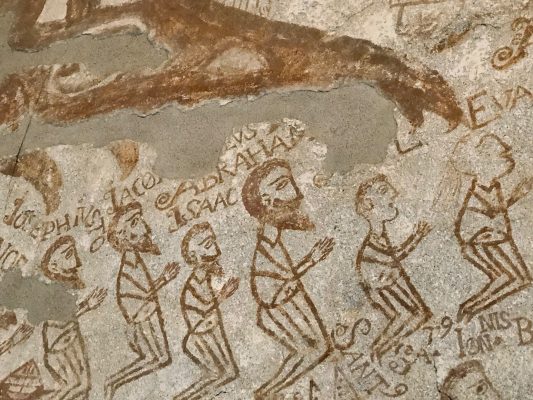 Step into the Steri Palace and you are immediately plunged into the abyss of one of history’s most blood-soaked episodes – one which saw Jews persecuted, tortured and publicly burnt at the stake.

The walls speak to you simultaneously of tradition and history and persecution and destruction – yet another profoundly dark chapter in the Jewish story.

At the beginning of the 14th century, the Aragonese King Frederick III obliged the Jewish population to identify themselves and their shops with a red mark, a practice that would be hauntingly echoed over 700 years later in Nazi Germany.

Little by little, the liberties of Sicily’s Jewish communities were reduced: synagogues were seized or forcibly moved out of town centres, ghettoisation was intensified, and the long-acquired rights of internal governance trampled on.

Then, in 1478, the Spanish Inquisition was established, signalling the beginning of the end for Iberian and Sicilian Jews.

Over 500 years since the forced expulsion of Sicily’s Jewish population, there are some signs of a renascent community.

When the Decree of Alhambra was issued, some Sicilian Jews left immediately, selling off their property and taking as many of their belongings with them as possible.

Those who were not so quick to leave had most of their possessions and assets seized.

Those that left also took with them their cultural and culinary traditions, a terrible loss for Sicily.

It is estimated that around 9,000 Jews remained. They converted to Catholicism and became known as neofiti (neophytes), the Sicilian version of the Iberian conversos.

Today, little remains of the Jewish communities that once flourished on the island. Two notable exceptions are the miqweh – ritual baths – in Syracuse and Palermo. The former, the oldest and largest in Europe, are located under the Residence Hotel alla Giudecca on Ortigia.

Guided tours are available almost every day. The latter are under Palazzo Marchesi in Palermo’s old town centre, just off Via Maqueda. These are only open to the public a few days of the year, usually in October as part of the Vie dei Tesori.

Fittingly, the new synagogue is located on the site where an old synagogue once stood. Its address, Piazza Meschita, invites reflection, as meschita, meaning mosque, derives from the Spanish word mezquito, an etymological curiosity that intimates a great deal about Sicily’s tortuous, tangled web of history.

A fascinating itinerary to discover the most significant places that have been set of the Holy Inquisition in Palermo.

The tour will be done on foot along the city center and it will be full of anecdotes and legends associated with men and women accused of witchcraft and heresy burned at the stake for heresy by cruel Spanish inquisitors.

We will visit interesting monuments especially the Chiaramonte Castle and the Museum of the Holy Inquisition where along the walls of the cells you will see the drawings made by prisonersunjustly imprisoned and tortured: graffiti, poems and sonnets full of suffering and despair.

Duration: up to 4 hours
Departure time: 9.30 AM.
Walking Tour: Private Guided Tour
Meeting Point: At Your Hotel (if centrally located)
Included in the tour: guided tour of the monuments as specified in the itinerary.
Not included in the tour: transport, admission fee, meal.
Schedule: This tour is Private and is arranged from Tuesday to Saturday