A unique product that recalls the colors and flavors of this warm island.

A veritable celebration of all senses. 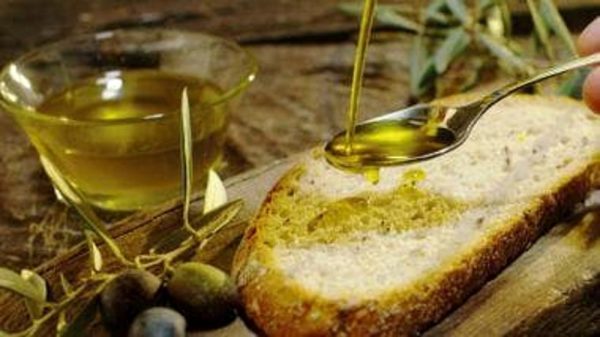 The main olive varieties used to produce this delicacy are Biancolilla, Cerasuola, Moresca, Nocellara del Belice, Nocellara Etnea, Ogliarola Messinese, and Tonda Iblea, but some other varieties grown on the island can also be used.

According to many historical findings, the slopes of the Sicilian volcano Etna have a rich history and tradition of producing olive oil and the surrounding volcanic soil seems to be perfect for olive cultivation. Monte Etna extra virgin olive oil is obtained from the Nocellara Etnea olive variety, which must make up at least 65% of the groves.

Other varieties present in the are are: Moresca, Tonda Iblea, Ogliarola Messinese, Biancolilla, Brandofino and Olivo di Castiglione. Monte Etna oil is produced in the provinces of Catania, Enna, and Messina.

It is characterized by a golden yellow color with green hues, a pronounced fruity aroma, with delicate herbal sensations and a slightly bitter and spicy taste. Because of its pleasant fruity flavor, Etna oil is perfect for drizzling over bruschettas and fresh vegetables.

Obtained from the Biancolilla, Nocellara del Belice and Cerasuola olive varieties, with at least 90% present in the olive groves, alone or in combination, Val di Mazara extra virgin olive oil is a product of sunny Sicily.

Named after the once largest island county, the Mazara olive oil is today produced in the provinces of Palermo and Agrigento. This oil has a distinctive and intense aroma coming from the widespread presence of artichoke, citrus and almond groves in the wider Mazara del Vallo area.

It has a golden yellow color with shades of green, a velvety, fruity taste with hints of almond, and quite a sweet aftertaste. It goes well with salads, grilled vegetables and fish.

Another typical Sicilian product, Valdemone olive oil comes from the ancient Vallis Nemorum, today known as Valdemone or even Val di Demona – the Demon Valley. Popular in the Roman times because of its dense forests, Valdemone was once an administrative and financial seat of the region, with a rich tradition of oil making: the province of Samperi alone had, at least, eight olive presses around the year 1500, which clearly shows how important olive cultivation was to this area.

Valdemone oil is obtained mainly from the Santagatese, Ogliarola Messina and Minuta olive varieties (at least 70%), and other varietals such as Mandanici, Nocellara Messina, Ottobratica, Brandofino and Verdello (the remaining 30%).

It is green with golden shades, and its aroma brings out an intense scent of freshly picked olives accompanied by herbal notes of the plants indigenous to the wider Messina area. On the palate, Valdemone is delicate and slightly bitter. Commonly used raw, it goes particularly well with Caponata, a Sicilian eggplant dish, and other vegetable dishes.

Olive cultivation around the Monte Iblei mountain massif dates back to the times of Great Greece, which is substantiated with the ancient olive oil commercial trade agreements known as pandette. Today, the prized Monti Iblei oil is produced in the Sicilian provinces of Catania, Ragusa and Syracuse.

All versions have a maximum acidity of 0.65% and exude a fruity aroma with hints of hay and have a slightly piquant taste.

Valli Trapanesi extra virgin olive oil has been produced in the Sicilian province of Trapani since ancient times. This high-quality oil has a maximum acidity of 0.50% and is especially prized for its nutritional values. It is produced in Valle del Belice and Valle di Erice, influenced by a mild Mediterranean climate in both valleys.

Valli Trapanesi is predominantly obtained from the Cerasuola and Nocellara del Belice olives varieties. It ranges in color from yellow to green, and has a harmonious and elegant fruity aroma of medium intensity, exuding balsamic notes of ripe tomatoes.

The taste of Valli Trapanesi is well balanced between bitter and spicy notes. It can be used for cooking or to enhance the taste of grilled fish, meat and various tomato sauces.

This variety of Sicilian extra virgin olive oil is produced with the local cultivar Nocellara del Belice, which is said to be 2700 years old. However, due to efforts of the local olive growers, the use of this product as a table olive oil dates back to the early 20th century.

As the name suggests, this olive oil is produced in the Belice Valley, and it is known for its very low acidity of no more than 0.20 percent. The colors of Valle del Belice oil range from golden to deep green, and the aroma exudes hints of fresh herbs, tomatoes, and artichokes.

This oil has quite a pronounced pungent flavor and is best enjoyed in salads and vegetable dishes.