Erice and the Venus Castle – 1 day

Erice and the Venus Castle - Between woods and forests to reach the summit, the ancient Medieval town of Erice, one of the most beautiful villages in Italy.

ERICE AND THE VENUS CASTLE – 1 DAY

Season: all year available on request
Duration: One Day Tour
Time: full day from h 9AM
Season: All year round
Meeting Point: to be advised at time of booking

Saint Anna Route
Hiking Details: Km: 6 | 680 mt elevation gain
Introduction: Full steam ahead with nature! Between woods and forests to reach the summit, the ancient Medieval town of Erice, one of the most beautiful villages in Italy.
Level of Difficulty:The first thing to say is that this part of the hike should not be attempted unless you are experienced and physically fit.

What to wear and bring with you:

Day 1
Erice and the Venus Castle
Today independent departure to join the Meeting Point (Details: to be shared at time of booking).

We are on the top of Mount Erice, in the square that takes its name from the nearby Chiesa di San Giovanni (church of St. John), one of the oldest churches of Erice.

This church, from where you can enjoy a breathtaking view, is recognizable by its white dome that stands out at the eastern tip of Erice. Its original structure it is thought to date back to the 12th century; the church has been restored and extended several times, while featuring its suggestive entrance portal in Late-Gothic style; now it is a modern auditorium which preserves some masterpieces of Renaissance art. From the square, a walkway leads to the Torretta Pepoli (Pepoli Turret), dating back to the 19th century and built by count Agostino Pepoli (not accidentally named after him). Built on a cliff in a charming panoramic position (stretching from the gulf of Bonagia to Trapani and its saltpans), this characteristic Art Nouveau building was intended for meditation and study. Today the Turret, after an accurate restoration, has regained its original beauty and can be visited.

The Castello Normanno (Norman Castle) rises majestically on an imposing rocky outcrop; below a pine forest (created by count Pepoli who wanted to breathe ‘balmy air’) surrounds the area. The Castle was built over the remains of the ancient temple of Venere (Venus), a sacred building erected by the Sicanian-Elymians (9th-8th centuries b.C.) for the worship of the goddess of fertility, as well as a place of devotion for the Mediterranean peoples.

Placed as a defence to the valley below, the castle was built in the 12th century AD by the Normans. The doorway is characterised by an ogival arch and topped by a commemorative plaque depicting the eagle of the Hapsburg monarchy. Besides its defensive function it also housed the prisons which are still visible. Today it is used as a place for cultural exchange: during summer nights it’s easy to be enchanted by listening to music, poems and old songs, enveloped in a seductive atmosphere.

Then the path continues in a south-westerly direction to Porta (Gate) Trapani, one of the three gates to Erice through the Cyclopean walls.

This afternoon END of our services.

Today independent departure to join the Meeting Point (Details: to be shared at time of booking).

Saint Anna Route
Hiking Details: Km: 6 | 680 mt elevation gain
Introduction: Full steam ahead with nature! Between woods and forests to reach the summit, the ancient Medieval town of Erice, one of the most beautiful villages in Italy.
Level of Difficulty:The first thing to say is that this part of the hike should not be attempted unless you are experienced and physically fit.

The route reaches the top of the mountain where is located the ancient medieval village of Erice.

After a short urban stretch along Via Capua, Via Manzoni, Via Pola and Via Sant’Anna, you can easily reach the entrance of the Martogna picnic area, within the “Monte (Mount) Erice” wooded area, characterised by Mediterranean pine trees, oaks trees and eucalyptus trees. The area is also equipped with wooden benches and tables, a picnic area, a children’s playground and an area with different animal species (including goats from Tibet, fallow deer, donkeys from Pantelleria and many species of birds).

In the second stretch the path rises towards Pizzo Argenteria (where a breathtaking view over Trapani can be admired) and then it reaches the Sanctuary of Sant’Anna (332 m.), whose construction dates back to the 17th century. For centuries it was a pilgrimage site by the devotees of Sant’Anna. Now it is a place of silence and prayer offering unique views of the extreme western tip of Sicily, Trapani, the Egadi islands and the crossroad of the two seas: the Thyrrenian and the Mediterranean.

The path continues on for about another kilometer until the Forestry Commission Building; it goes through a wood towards Porta (Gate) Trapani, one of the three gateways to Erice, so named because it looks towards Trapani. It is also an evidence of the Cyclopean fortification walls (8th-7th centuries b.C.) of Erice

Approximately 5,5 kilometers to reach one of the most beatiful hamlets of Italy, to visit historical and artistic monuments such as the Castello Normanno (Norman Castle, 12th -13th centuries), the Torretta Pepoli (Pepoli Turret, 19th century), the Duomo dell’Assunta (the Main Church dedicated to the Assumption of the Virgin Mary, 14th century) –to name but a few- or to delight your palate with the typical sweets from Erice, such as those made of almond paste, the so called “genovesi” or the “mustazzoli”, or to go shopping walking along the narrow streets: do not miss the trappiti (the traditional carpets) and the hand painted pottery, evidences of an artistic handicraft handed on from generations.

During the afternoon END our services. Contact us for more information
Thanks for sending your request.
We have sent an email to your email address, check your inbox or spam.
An error occurred.
Please check all fields. 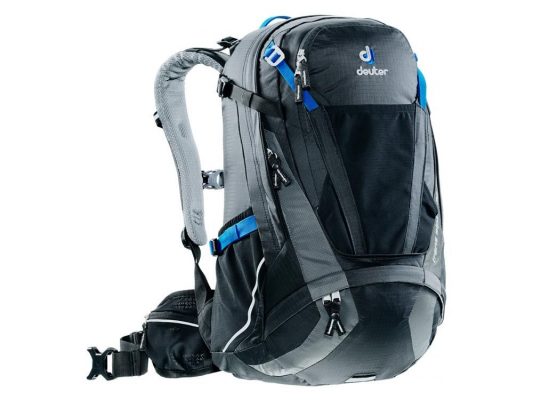 DEUTER has developed specials ystem tailored to the specific requirements of the various areas of application. We are pleased to introduce them as below specified:

DEUTER AIRCOMFORT
For maximum ventilation, we use small to medium-volume backpacks that are well suited to easier terrain. The permanently elastic spring steel frame forms the indestructible heart of the Aircomfort. It provides the airy mesh net with a stable tension, even when fully loaded, and creates a ventilation space between the backpack and back that allows the humidity to be extracted freely.

DEUTER AIRCONTACT
The easiest way to carry large weights comfortably is when the backpack and wearer form a single unit. Our Aircontact principle starts here: The carry system sits directly on the body, and the weight is kept close to the body’s centre of gravity. This guarantees full control and an effective load transfer. At the same time, the breathable Aircontact back pads ensure noticeably comfortable ventilation with every movement through a pump effect.

In every riding situation, a bike backpack must firmly sit on the rider’s back. Our unique Airstripes system ensures a firm fit and ventilation: thanks to the low backrest it continuously circulates fresh air between the Airstripes pads with their ventilation channels and the wide AirMesh cover. At the same time, the weight is always kept close to the body. This prevents the build-up of centrifugal forces that could cause the backpack to break loose. 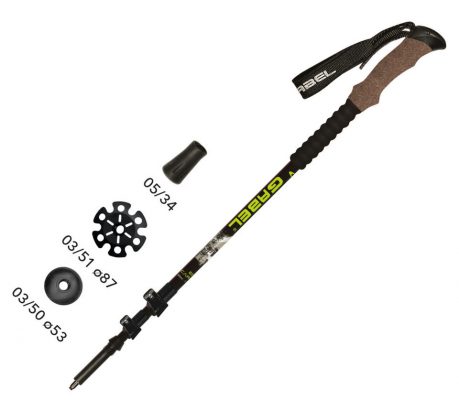 GABEL Authorized Retailer is an amazing company specialized in trekking and nordic walking lines. Quality products are guaranteed by a leading brand in the industry as only Gabel can be, with costant new special offers, discounted products and new entries, including the new racing production line designed for the World Cup athletes.

Advantages of Hiking Poles
Most obviously, poles reduce the impact of hiking on knee joints and leg muscles. Arm and shoulder muscles support and relieve the leg muscles. With the basic "hands above the heart" position necessitated by the poles, circulation is improved and heart rate is reduced. The "rhythm" created by walking with poles leads to relaxed, more regular breathing and increased stamina.

A landmark study published by Dr. G. Neureuther in 1981 proved that use of "ski poles" while walking reduces the pressure strain on the opposite leg by approximately 20%. Furthermore, while walking on level ground, poles reduce the body weight carried by the legs by approximately 5 kg every step. Move to an incline, and that reduction increases to 8 kg. This translates into tons of weight -- yes, tons -- for even a two hour hike.

Jacquie Hunt, editor of a popular hiking newsletter, weighs in with additional health benefits: "An advantage that I found once I started using poles is that my hands no longer swell up when it is hot. Keeping your arms moving so the blood doesn't pool in the hands is a lot safer than keeping hands high on pack straps and risking a smashed face if you trip."

Finally, poles help many people with balance issues. We all have different comfort levels when balancing along puncheons, crossing streams, etc.; for some hikers, trekking poles are worth their weight in gold. They can certainly aid when crossing soft ground, and can be indispensible for tasks like river crossings, and scree running.

Book your Deuter Backapack and Gabel Pole with us!