8 days private tour, land only with English speaking driver exploring a showcase of Sicily and enjoy local life, street food and delicious meals in combo with historical and archaeological sites.

08 Days, Sicily Tours
This is a Private Tour

Hotel Package: not included but available on request
Airline Tickets: not purchased by us

This afternoon meet the Local Guide in the area around the Cathedral and catch on a taxi to move to Monreale to see where Arab-Norman art and architecture reached its pinnacle in the Duomo (Tips: not included), launched in 1174 by William II. It represents scenes from the Old and New Testaments all in golden mosaics.

We then return to Palermo.
Day 3
Palermo > Cefalù > Taormina
Private vehicle and English speaking driver disposal: full day from h 9AM
Today meet the driver at hotel and in one hour driving we will join the lovely village of Cefalù. While Cefalù's origins go back to at least Greek times, the town we now know and love was built at the behest of the Norman King, Roger II. Construction of the Cathedral began in 1131 and is an exquisite example of what has been termed "Sicilian Romanesque". Thanks to the splendid mosaic of Christ Pantocrator above the altar, it is twinned with the Palatine Chapel in Palermo and the Dome in Monreale. Exploring the town we will join the Lavatory, which is fed by a natural spring and the Osterio Magno which, according to tradition was King Roger's very own residence.

This afternoon, departure for Taormina, the world famous resort town of Sicily.
Day 4
Relax in Taormina
Today is at leisure for your independent walk in the Corso Umberto Street, the core of the town. From here you can join the Greek Theatre (Admission fee: not included), built for the most part of brick, and is therefore probably of Roman date, though the plan and arrangement are in accordance with those of Greek, rather than Roman, theatres;  It is one of the world’s most popular tourist attractions, so that Johann Wolfgang Goethe in his famous “Journey to Italy” wrote: “No theater audience has never had such a sight in front of him.” The highlight of today walking tour is for sure go up using the old steps up to the top of the theatre to admire an amazing view of the Taormina Bay and the Etna volcano, the view from here is amazing and unforgettable.

The balance of the day is at leisure.
Day 5
Relax in Taormina
Relax in Taormina or Optional Day Tour
-Taormina Half Day Cooking Class
-Etna Wine and Jeep Tour
-Taormina Boat Tour
-Etna Volcano
Day 6
Taormina > Piazza Armerina and Agrigento > Palermo
Private Vehicle and English Speaking Driver Disposal: full day from h 8AM
Today departure for Piazza Armerina situated deep in the Sicilian hinterland, at 721 metres above sea level, one of Sicily’s most frequented tourist spots. However, it is not the town that most people come to see, but the famous Villa Romana del Casale (Admission fee: not included). Built in the middle of the 4th Century AD as a hunting lodge by a Roman patrician (it is not known for sure who the owner was) the Villa is home to some of the best preserved and extensive examples of Roman mosaics spread over around 3500mt. The villa is one of the most luxurious of its kind. It is especially noteworthy for the richness and quality of the mosaics which decorate almost every room; they are the finest mosaics in situ anywhere in the Roman world. These extraordinarily vivid mosaics, probably produced by North African artisans, deal with numerous subjects, ranging from Homeric escapades and mythological scenes to portrayals of daily life, including the famous tableau of girls exercising in their “bikinis”.

Later onto Agrigento to visit the finest of all ancient Greek sites—the complete Doric Temples (Admission fee: not included), one of Sicily’s most famous historical attractions. This is one of the most outstanding examples of Greater Greece art and architecture, and is one of the main attractions of Sicily as well as a national monument of Italy. The area was included in the UNESCO Heritage Site list in 1997. Founded as a Greek colony in the 6th century B.C., Agrigento became one of the leading cities in the Mediterranean world. Its supremacy and pride are demonstrated by the remains of the magnificent Doric temples that dominate the ancient town, much of which still lies intact under today's fields and orchards. This splendid archaeological park consists of eight temples (and various other remains) built between about 510 BC and 430 BC: the Temple of Hera, the Temple of Concordia, the Temple of Heracles, the Temple of Olympian Zeus, the Temple of Castor and Pollux, the Temple of Hephaestos, the Temple of Demeter, and the Temple of Asclepius (the God of Medicine). Apart from this latter, which is to be found on the banks of the Akragas river, all are situated in the same area on rocky crests south of modern day Agrigento (not really in a Valley at all!).

This afternoon departure for Palermo.
Day 7
Relax in Palermo
Relax in Palermo or Optional Day Tour
-Olive Oil, Saltpans and Winery
-Erice and Segesta
-Palermo Mediterranean Cooking Class
-Village Experience
Day 8
Palermo > Palermo airport
Private vehicle and Italian speaking chauffeur disposal: transfer out only
Today transfer to the airport.
Included
Not Included
Contact us for more information
Thanks for sending your request.
We have sent an email to your email address, check your inbox or spam.
An error occurred.
Please check all fields. 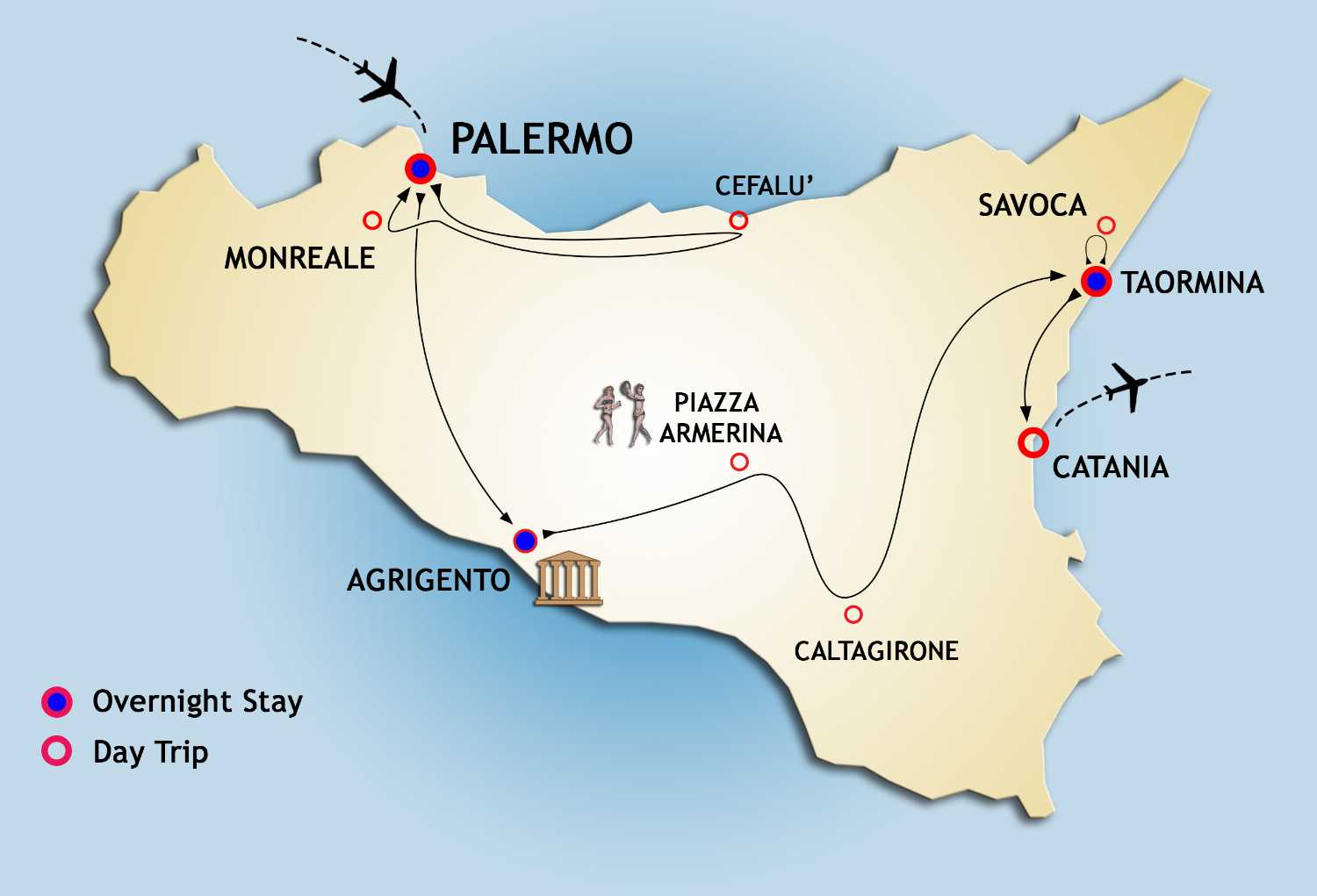