9 days private multi days tour of Sicily with English speaking driver to embrace the Island from the east to the west and back to the east. A great way to visit the most popular sites indulging your senses in the local delicioius meals

09 Days, Sicily Tours
This is a Private Tour

Welcome to the warm, beautiful and pleasant island of Sicily! Upon arrival at Catania Airport please proceed through the Passport Control and collect your luggage inside the customs area. Then meet the driver showing a sign with your name and drivw to Syracusa.
Day 2
Syracusa Half Day
Private taxi disposal: from Ortigia to the Archaological Park and return

English speaking guide disposal: half day from h 9AM

Today meet the local guide at hotel and catch on a taxi to move to the Archaeological Park (Admission fee: not included), highlights of which are the Greek Theatre, the Roman Amphitheatre and the Paradise Quarry. Then back to Ortigia, the heart of the city center. This delightful pedestrian small island, connected with Syracusa by the Umbertino Bridge, is home to the wonderful Cathedral built on the site of an ancient Temple of Athena as can clearly be seen from the original Doric columns that were incorporated into the building’s main structure. Also on this square is the beautifully symmetrical Baroque Palazzo Beneventano and the church of Santa Lucia, the town’s patron saint. Later to the colourful daily Street Market, which sells a fantastic array of fruit, vegetables, fish and meat.

Today we drive to Modica. Like the other towns in the Val di Noto, was badly damaged in the 1693 earthquake and largely rebuilt in Sicilian Baroque style. Modica is custodian of a 400 year tradition of Sicilian chocolate-making. Being part of the Spanish kingdom for so many years meant that Sicily was often one of the first recipients of the new foodstuffs being brought back from South America. Cacao was one of these and today Modica still specialises in making granulous chocolate, often flavoured with chilli pepper, cinnamon or vanilla, that is based on Aztec methods and recipes. Chocolate shops abound and, for the real chocoholic, it is sometimes possible to watch the “chocolatiers” at work. Tasting of Modica chocolate is a must. Then a short drive takes us to Ragusa Ibla, one of the most picturesque towns in Sicily. The view from the upper town over Ragusa Ibla on its own separate hilltop is quite breathtaking. One of the UNESCO-listed Baroque towns of south-eastern Sicily, Ragusa is also one of the principal filming locations for the Sicilian Detective Saga Il Commissario Montalbano (Montalbano Inspector), a series which has done wonders for publicising the beauty of this area.

Lunch in a local trattoria to taste the Stuffed Ravioli with Ricotta and delicious appetizers.

Today we enjoy the finest of all ancient Greek sites—the complete Doric Temples (Admission fee: not included), one of Sicily’s most famous historical attractions. This is one of the most outstanding examples of Greater Greece art and architecture, and is one of the main attractions of Sicily as well as a national monument of Italy. Later we drive on a very charming route of inland villages off-the-beaten-track between hills and country landscapes. Upon arrival we meet a local guy who indulge us to taste just made ricotta cheese, homemade biscuits and the famous pane-cunsatu, a delicious bread stuffed with cheese, organic olive oil, salt, tomatoes and anchovies. Then starts our lunch in picnic style with locals and our amazing and unforgettable experience of true Sicily.

Lunch will be served in picnic style.

Today departure for Piazza Armerina, situated deep in the Sicilian hinterland, at 721 metres above sea level. Upon arrival we visit the Roman Villa (Admission fee: not included), built in the middle of the 4th Century AD as a hunting lodge by a Roman patrician. The Villa is home to some of the best preserved and extensive examples of Roman mosaics spread over around 3500mt and is one of the most luxurious of its kind. These extraordinarily vivid mosaics, probably produced by North African artisans, deal with numerous subjects, ranging from Homeric escapades and mythological scenes to portrayals of daily life, including the famous tableau of girls exercising in their “bikinis”.

We then continue to Taormina, the world famous resort town of Sicily.
Day 7
Taormina
Today is at leisure for your independent walk in the Corso Umberto Street, the core of the town. From here you can join the Greek Theatre (Admission fee: not included), built for the most part of brick, and is therefore probably of Roman date, though the plan and arrangement are in accordance with those of Greek, rather than Roman, theatres;  It is one of the world’s most popular tourist attractions, so that Johann Wolfgang Goethe in his famous “Journey to Italy” wrote: “No theater audience has never had such a sight in front of him.” The highlight of today walking tour is for sure go up using the old steps up to the top of the theatre to admire an amazing view of the Taormina Bay and the Etna volcano, the view from here is amazing and unforgettable. 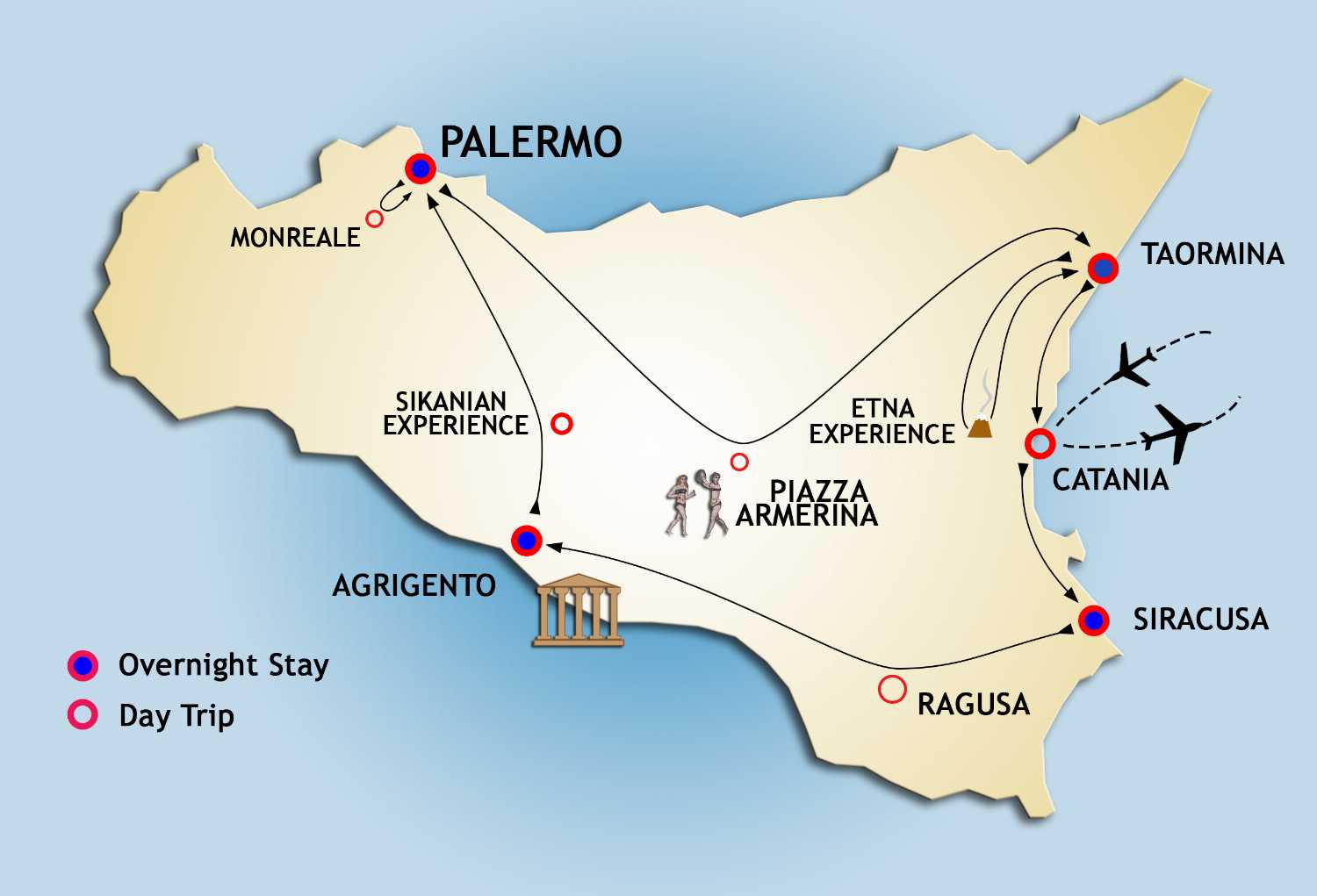