7 days private tour of Sicily to enjoy a lovely showcase of the Island indulging your senses in the local Street food, winery and Amazing landscapes in combo with archaeological sites

07 Days, Sicily Tours
This is a Private Tour

We then return to Palermo.
Day 3
Palermo > Erice, lunch in an Olive Oil and Salt Way Road > Palermo
Private vehicle and English speaking driver disposal: full day from h 8.30AM

We then travel from Erice to Trapani-Marsala Salt Way Road, skirting the lagoon to see the snow-capped mountains but hills of salt, one of the Sicilian economy's historical resources that was already very precious in the days of the Phoenicians, who were the first to bring some form of technology to its production. The favourable climatic circumstances, such as high temperatures and a wind that increases evaporation, plus the shallowness of the water, contribute to create the evocative and unreal scenario created by the salt flats, which form a sort of immense chessboard that ranges in colour from off-green to pink. The tourist paths for visits to the salt flats wind their way around the great basins and, running along the edges of the tanks of seawater - which glistens in the sun as it crystallizes - finally reach the mounds of salt. These mounds are topped by a series of recently restored windmills that recall the days when they were among the main instruments for pumping the water and grinding the salt. A panorama that has to be enjoyed, preferably at sunset, when everything becomes tinged with red. We then arrive at the salt pans Saline Ettore Infersa (Admission fee: non included) which offer a truly unique landscape. Windmills, first introduced during mediaeval times, dot the horizon, a testament to how things were once done, though one or two continue to function, pumping water through the sluice gates into or out of the various basins. Piles of harvested salt, neatly covered with terracotta tiles, lie between the road and the basins waiting to be despatched.
Day 4
Palermo > Agrigento and Piazza Armerina > Taormina
Private vehicle and English speaking driver disposal: full day from h 8.30AM

We then continue to Taormina.
Day 5
Relax in Taormina
Today is at leisure for your independent walk in the Corso Umberto Street, the core of the town. From here you can join the Greek Theatre (Admission fee: not included), built for the most part of brick, and is therefore probably of Roman date, though the plan and arrangement are in accordance with those of Greek, rather than Roman, theatres;  It is one of the world’s most popular tourist attractions, so that Johann Wolfgang Goethe in his famous “Journey to Italy” wrote: “No theater audience has never had such a sight in front of him.” The highlight of today walking tour is for sure go up using the old steps up to the top of the theatre to admire an amazing view of the Taormina Bay and the Etna volcano, the view from here is amazing and unforgettable.

Today transfer to Catania airport.
Included
Not Included
Contact us for more information
Thanks for sending your request.
We have sent an email to your email address, check your inbox or spam.
An error occurred.
Please check all fields. 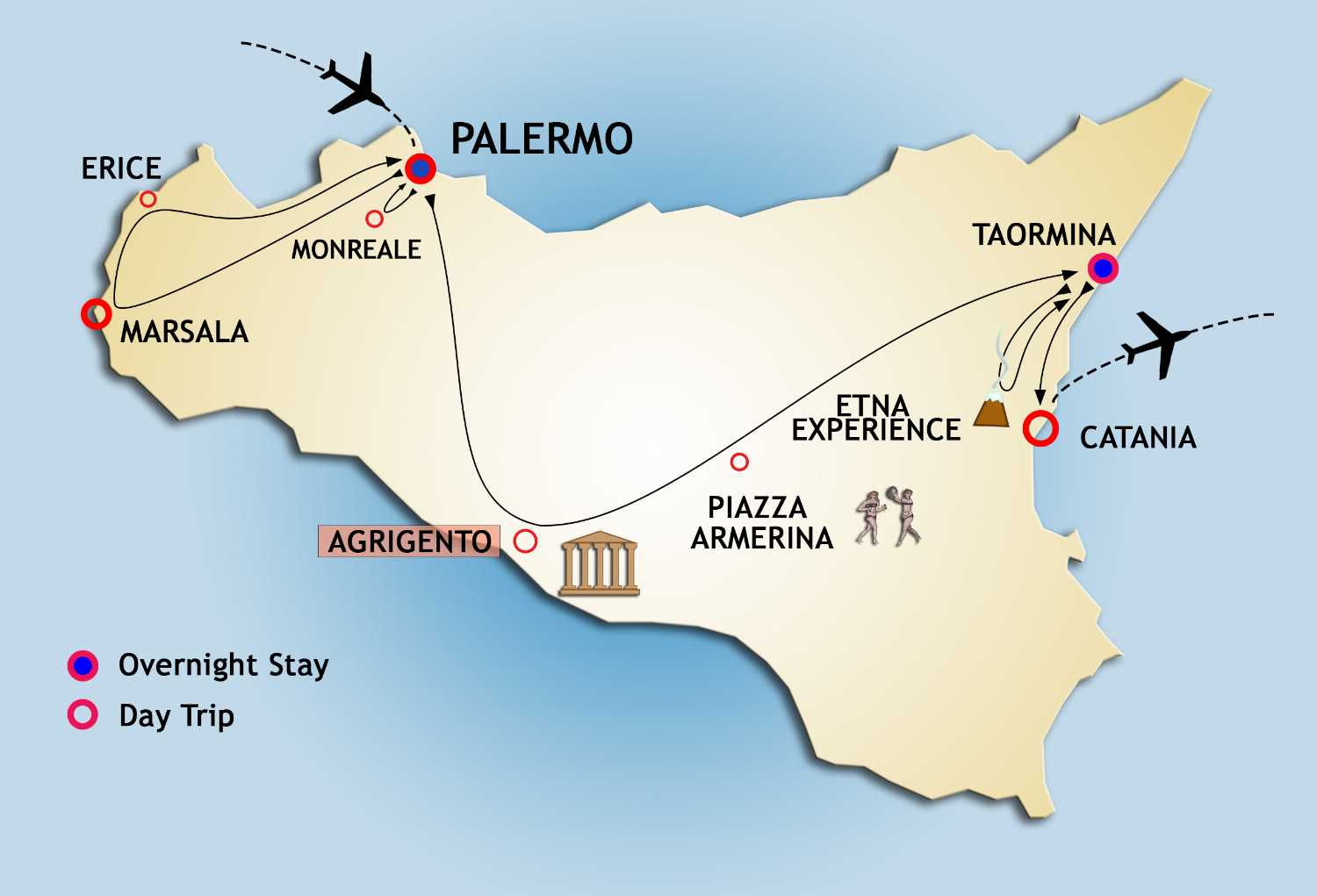