Sicily in 6 days with a small size group tour from the west to the east, daily departures, up to 6 people. 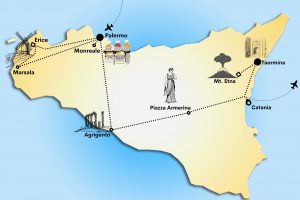 There are lot of options for tours in Sicily, where you can relish great wines looking at breathtaking surroundings such as the Etna Volcano, endless wineries, street food meals, archaeological sites and lovely coastal towns.

We have assembled top activities, top sights and especially top rated services and we have designed this tour for total 6 days.


Season: all year available on request
5 nights/6 days
Palermo (3 night) Taormina (2 night)
Accommodation: Not Included. You can either book your hotel on your own, or we can help and include it in your package.
Airline Tickets: not purchased by us

Fell free to book the hotels that appeal you more or ask us to provide an Optional Hotel Package based on the hotel rating you wish to lodge in.


THE RATE IS GROUND SERVICES ONLY: euro 818

(based on a group of 2 people travelling together)

Day 1
Arrival in Palermo Palermo Airport > Town
Welcome to the warm, beautiful and pleasant island of Sicily! Upon arrival at Palermo Airport please proceed through Passport Control and collect your luggage inside the customs area.

Then, independent transfer to the town or Optional Airport Transfer.

The balance of the day is at leisure.
Day 2
Palermo Street Food Walking Tour and Monreale
English Speaking Team Included half day from h 10AM
Meeting Point: h 10AM at the Palermo Opera House
Taxi Fee to Monreale: included (round trip service)


Today h 10AM meet our team at the Palermo Opera House to start our Street Food Walking Tour!

We start the tour admiring the Massimo Theatre-Palermo Opera House (external view), then we explore a suggestive and lively open-air market, a place with strong Arab influences, resembling a souk, with picturesque stands of fresh fish, cheeses, fruits and vegetables. During the tour we will have the opportunity to observe local people in their daily activities and to savor foods that a real Sicilian people love to eat! Tasting of typical street food is included. The walking tour through the ancient center of Palermo is around 3-4 hours, and we will visit several monuments including Piazza Pretoria, the Four Corners and a short visit to the Cathedral.

At the Cathedral we meet the taxi to move to Monreale for an independent visit the Dome (Admission fees: not included), a wonderful example of the Arab-Norman art and architecture. Founded in 1174 by William II, the Dome represents scenes from the Old and New Testaments all in golden mosaics.

Later the taxi will transfer us back to Palermo.
Day 3
Marsala, Salt Way Road, Lunch and Erice
Vehicle and English speaking driver Disposal: full day
Meeting Point: h 8.30AM at your hotel

Meet our Team at your hotel. Later we travel to Marsala region along the Salt Way Road. While travelling we will be 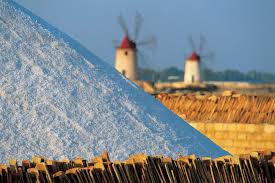 fascinated by this unusual landscape: panels of mirror-like water, held by thin strips of earth and white windmills. In Summer now as then in some areas between Trapani and Marsala it is possible to admire piles of salt just harvested.

Lunch in a local farmhouse to taste local delicious dishes.

Departure for Erice, a wonderfully preserved Mediaeval town offering the most breathtaking views and a palpable sense of history. Wander through its ancient streets and visit some of the famous homemade pastry shops world-famous for marzipan candies and other delicacies like almond and pistachio pastries. Almond marzipan probably came to Sicily from Spain, where the Arabs may have introduced it during the Middle Ages. Whether they also brought it to Sicily, which was home to several emirates before 1071, is a matter of debate. However, there is no doubt that it was the Arabs who introduced sugar cane in both Sicily and Spain, and without this key ingredient marzipan could not exist.

Today meet our team and departure for Agrigento. to visit the finest of all ancient Greek sites—the complete Doric Temples (Admission fee: not included), one of Sicily’s most

famous historical attractions. This is one of the most outstanding examples of Greater Greece art and architecture, and is one of the main attractions of Sicily as well as a national monument of Italy. The area was included in the UNESCO Heritage Site list in 1997. Founded as a Greek colony in the 6th century B.C., Agrigento became one of the leading cities in the Mediterranean world. Its supremacy and pride are demonstrated by the remains of the magnificent Doric temples that dominate the ancient town, much of which still lies intact under today’s fields and orchards. This splendid archaeological park consists of eight temples (and various other remains) built between about 510 BC and 430 BC: the Temple of Hera, the Temple of Concordia, the Temple of Heracles, the Temple of Olympian Zeus, the Temple of Castor and Pollux, the Temple of Hephaestos, the Temple of Demeter, and the Temple of Asclepius (the God of Medicine). Apart from this latter, which is to be found on the banks of the Akragas river, all are situated in the same area on rocky crests south of modern day Agrigento (not really in a Valley at all!).

Departure for Piazza Armerina situated deep in the Sicilian hinterland, at 721 metres above sea level, one

of Sicily’s most frequented tourist spots. However, it is not the town that most people come to see, but the famous Villa Romana del Casale (Admission fee: not included). Built in the middle of the 4th Century AD as a hunting lodge by a Roman patrician (it is not known for sure who the owner was) the Villa is home to some of the best preserved and extensive examples of Roman mosaics spread over around 3500mt. The villa is one of the most luxurious of its kind. It is especially noteworthy for the richness and quality of the mosaics which decorate almost every room; they are the finest mosaics in situ anywhere in the Roman world. These extraordinarily vivid mosaics, probably produced by North African artisans, deal with numerous subjects, ranging from Homeric escapades and mythological scenes to portrayals of daily life, including the famous tableau of girls exercising in their “bikinis”.

A lovely drive along the Northern slopes of the Volcano (regular road) will give you the opportunity to visit different lava flows and to observe geological and botanical treasures. Lava flow of 1923 reached the town of Linguaglossa, while the near village of Catena was partially destroyed. Driving through pines, oaks and brooms we will continue the Etna ascent and after an off-road itinerary you will visit the lava front of 2002 and a natural cave created from the lava flow.

We will then proceed to an area called Piano Provenzana located at 1800 meters above sea level, where we will see the effect of the great eruption of 2002. This eruption lasted almost three months and it is considered one of the most explosive eruptions from the twentieth century. At Piano Provenzana you will find a ski resort.

In accordance with your Driver, it is possible to do a medium hiking and see some of the side craters characterized by seven small, aligned eruptive cones (or “buttonholes”). Along the way we will stop to enjoy a breathtaking view of the North-East Crater, the eruptive mouths and 2002 lava flow, and down to the sea you will admire part of the Ionian and Calabrian coast.

Then, proceed to have lunch in a typical rustic restaurant where you will be served a 3 courses menu which includes a rich selection of starter (salami, cheese, vegetables of the season), a taste of pasta and dessert. Lunch will also include local wine and mineral water.

After lunch the tour will get back to your hotel in Taormina.
Day 6
Departure from Catania airport
Time to say Arrivederci Sicilia. Independent transfer to Catania airport or Optional Airport Transfer.
Included
Not Included
Contact us for more information
Thanks for sending your request.
We have sent an email to your email address, check your inbox or spam.
An error occurred.
Please check all fields. 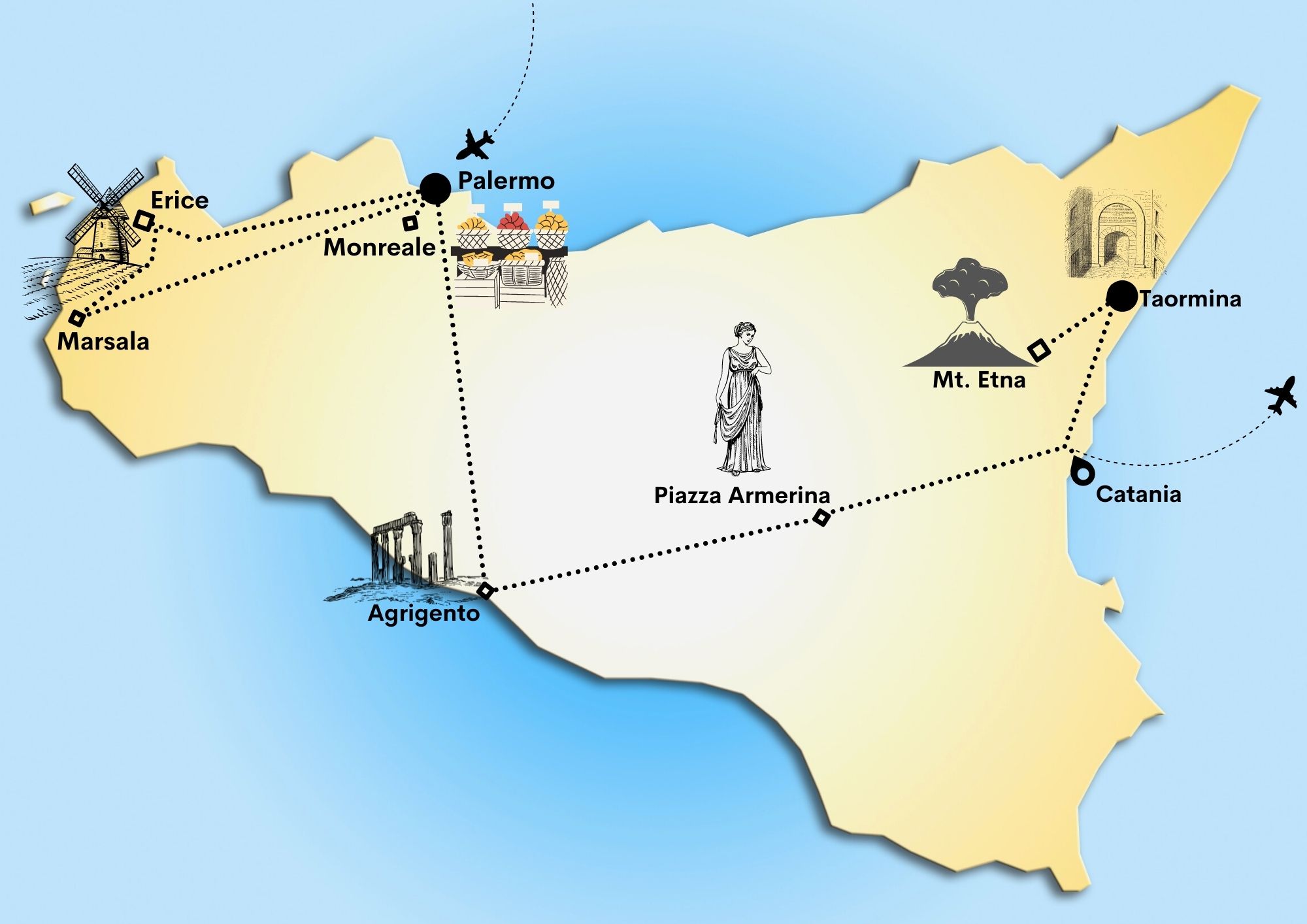