Was Spaghetti Invented in Sicily?

Was Spaghetti Invented in Sicily? 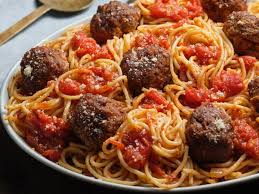 Valeria welcomes you and today we discuss about Spaghetti.

Real or not real … was spaghetti invented in Sicily?

Pasta, made from the flour of hard wheat with water and salt added, cooked by boiling; has existed in some form since the days of the Roman Empire.

Made from any of several varieties of durum wheat that thrive in dry climates, pasta has become one of the world’s most popular foods. It is quite possible that this food, as it exists today, was first prepared in ancient Sicily.

But was spaghetti actually invented in Sicily?

It’s important to recognise that certain developments could have taken place in different parts of the world at the same time. Ice cream is a classic example.

In one form, it was prepared by the ancient Romans with the snows of Mount Etna, but it was probably known (in another form) to the ancient predecessors of the northern Russians. This kind of thing makes it difficult, and perhaps unfair, to attribute the origin of certain common foods to certain peoples and places.

So how did the idea that spaghetti was invented in Sicily get started?

Popular history says that it was invented in China, and that Marco Polo brought the knowledge of this food to Venice.

The spaghetti Polo encountered (and presumably tasted) in the far east was made from either rice flour or hard wheat flour (long noodles made from both grains exist in eastern cookery).

It is generally accepted that the variety of durum wheat known in Sicily during the Middle Ages was, like lemons and oranges, introduced by the Arabs. And that brings us to the pivotal part of the story.

Early in 1154, shortly before the death of Sicily’s monarch, King Roger II, and about a century before the birth of Marco Polo, a court chronicler and geographer named Abu Abdullah Mohammed al Edrisi (or Idrisi) completed a detailed geographical survey of Sicily.

It is to Edrisi that we owe much of our knowledge of the micro economy and social customs of twelfth-century Sicily. Little is known of Edrisi himself, except that he was born in northwestern Africa and educated in Spain.

He appears to have known the Muslim Mediterranean well. Edrisi arrived at Palermo in 1139, and was soon commissioned to research a work of global geography.

The content of the resulting opus, known to us as The Book of Roger, encompassed not only Sicily but other regions as well.

It yielded a global map (created in silver), now destroyed, and the book itself. Some of the book’s statements were revolutionary for their time, things like “the earth is round like a sphere.”

The Book of Roger is considered one of the most important scientific works of the Middle Ages.

Praised by Sicily’s Muslims, Jews and Orthodox (“Eastern”) Christians, it was not generally appreciated by the medieval popes or the Roman Catholic clergy, and for that reason its knowledge was sometimes suppressed in western Europe.

Like Marco Polo, Edrisi was a traveler who wrote about what he saw, but his work was much more scientific, and generally more objective, than Polo’s. More importantly, it survives in its original manuscript form; Marco Polo’s writings exist primarily as later transcriptions which were often altered.

A casual observation in the Book of Roger mentions that in the Sicilian town of Trabia the inhabitants made a form of pasta from hard wheat, and that this product, shaped into long strands, was manufactured in large quantity for export to other regions.

However, Edrisi does not speculate about the origin of this “spaghetti,” but the fact that he considers it noteworthy, and that it was widely exported to a thriving market, may indicate that it was not known outside Sicily at that time –at least not in the Mediterranean.

In those days, hard wheat of the African variety probably was not raised in the more humid northern regions of Europe, yet Edrisi wrote about England, Scandinavia and Russia, describing (albeit possibly based on secondhand knowledge) England’s rainy weather and Scandinavia’s seasonal endless days and nights.

Only a few years ago did Sicily’s tourism promoters rediscover this obscure reference to Sicilian spaghetti, and they’ve attempted to capitalise on it by referring to it in promotional publications. Their message seems to have been lost on the owners of the Chinese restaurants in Palermo and Catania.

Trabia’s vermicelli (from the Italian word for the “thin worms” it resembled) represents, at the very least, what may have been the earliest “industrial” production of pasta. It’s an industry that has changed the world’s tastes.

About the Author: Roberta Gangi has written numerous articles and one book dealing with Italian cultural and culinary history.
This is her first article for #BestofSicily Travel Magazine.

Thanks a bunch for your time!