Etna Volcano and Taormina: a day tour out of Palermo

Etna Volcano and Taormina, a day tour out of Palermo

… and today is teh day dedicate to the East Side of Sicily and especially to two lovely locations which are also the most popular Highlights of Sicily, UNESCO, which are combined as a day tour from Palermo: Etna Volcano and Taormina!

Tour Of Sicily arrange a regular day tour out of Palermo to visit both sites every Wednesday and Friday (up to October 31, 2020 and from April 1, 2021 to October 31, 2021) or every Monday and Thursday (from November 1, 2020 to March 31, 2021) at eur 108 per person, arranged in English, Italian and Spanish. Tour details are shown on: https://www.tourofsicily.com/tour/regular-tour-to-mount-etna-and-taormina-from-palermo/ 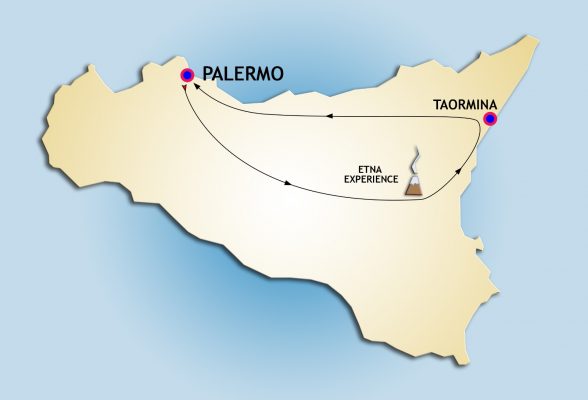 Sicily’s greatest natural attraction is also its highest mountain. To the ancient Greeks, Mount Etna was the realm of Vulcan, god of fire, and the home of the one-eyed monster known as the Cyclops.

At approximately 3350 meters, it is Europe’s highest active volcano. The height of its summit changes with each eruption, and over the centuries a few lava flows have reached the coast. Over 1200 square meters of Etna’s surface is covered with solidified lava.

Etna offers skiing in the Winter months and breathtaking hikes in the woods during the Summer. There are also a number of smaller peaks on the slopes of Etna, and some interesting caverns.
Since Etna is a strato volcano, with relatively cool lava temperatures and numerous openings (vents), nobody ever knows precisely where on its vast surface the next eruption will be. Etna’s long recorded history has proven invaluable to the world’s volcanologists.

Various species of oak and stone pine, as well as birch and beech, cover much of its sloped surface. Broom plant and other shrubs dot the area, especially at lower altitudes. Etna’s deciduous trees change color in the Autumn, creating a spectacular panoply of changing shades.

We then continue our tour to the amazing village: Taormina

We’ve taken to describing Taormina, a nineteenth century haunt of the English aristocracy, as a Sicilian Monte Carlo, without the casino or royal family. But anybody who has been to Monte Carlo, or even Positano (on the Amalfitan coast south of Naples), will find Taormina faintly similar yet very different. It has long been Sicily’s most famous resort town.

Taormina has endlessly winding medieval streets and tiny passages, each with its own secrets – great restaurants, cafés and ice cream bars. Some of these intriguing places are secluded gardens hidden by stone walls, others are set on terraces overlooking the coast or in more public but equally pleasant squares.

Taormina is beautiful by day but in the evenings its atmosphere is simply enchanting, whether you stroll the illuminated streets or indulge in the view of the coast over a delicious dinner.

Then there’s the rarer spectacle of Mount Etna’s nocturnal fires as lava flows along the snow-covered slopes of Europe’s greatest natural wonder, leaving a stream of steam and light in its wake.

Magnificent views of the sea complete the picture.

The most famous is the view overlooking the Greco-Roman amphitheatre, one of Sicily’s largest, with Mount Etna and the sea in the background.

The most famous is the view overlooking the Greco-Roman amphitheatre, one of Sicily’s largest, with Mount Etna and the sea in the background.

If you’re looking for a long glimpse of Sicily’s beauty and history from many angles in a single place, Taormina is a good choice. 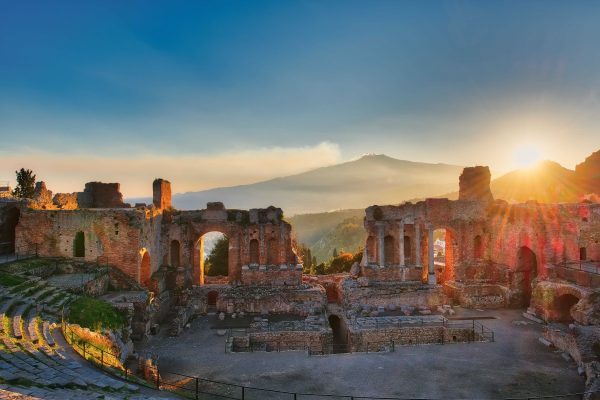 The city is located on a plateau below Mount Tauro, for which it is named, where there are the ruins of two medieval fortresses. Taormina’s ancient Greek splendor, medieval charm and unique views of Mount Etna and the Ionian coast afford the visitor a lasting impression of Sicily.

Taormina was settled by the people of nearby Naxos, an older Greek settlement, around 395 BC, on a Siculian city. These early residents had fled the tyranny of Dionysius the Elder, who eventually conquered Taormina anyway, in 392 BC. The city was named Tauromenion in 358 BC, and figured prominently in the regional politics of the next two centuries. 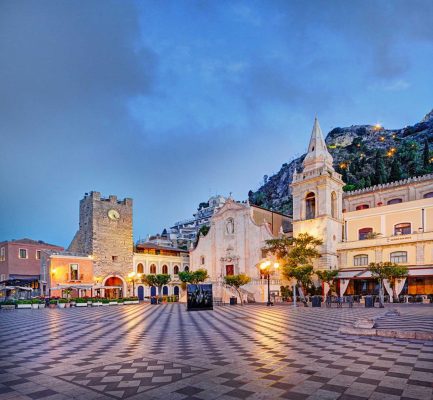 The city supported Pyrrhus, King of Epirus, against Syracuse in 278 BC. It was from Taormina that he conducted hisSicilian campaign, with the aid of some ten thousand troops.

Yet, Taormina was one of the first Sicilian cities to support Rome during the Punic Wars. Eunus took the city during the slave revolt, and when the Romans finally occupied the city they massacred thousands of slaves.

Taormina flourished in the time of Julius Caesar, only to suffer under Octavian, who retaliated against the city for its support of Pompey by expelling most of its inhabitants and offering their homes to Roman soldiers. Prosperity followed for the Romans of Taormina.

Ovid wrote of the “sweet mullet and tender eel” of Taormina’s waters. Writing in the first century, Pliny the Elder praised Taormina’s wines.

The city’s splendor, so evident even today, survived the fall of the Roman Empire, but her importance diminished. The “Saracen” castle atop Mount Tauro was probably built by the Saracens on an older Byzantine structure, and later enlarged by the Normans. Another fortress stood on still higher ground in the Castelmola district. Taormina’s medieval and ancient city walls remain very much in tact in the old city.

Though it is only about 200 meters above sea level, Taormina seems much higher. The Greek amphitheatre was built in the third century BC, and expanded by the Romans, who enlarged the stage and added a partial roof (now destroyed). Reserved seating existed even in Greek times; a seat bears the inscription of the name of Philistide, wife of Hieron II of Syracuse.

The world famous view of Mount Etna and the sea beyond the theatre is breathtaking. As well as the theatre is the site of dramatic performances during Summer; 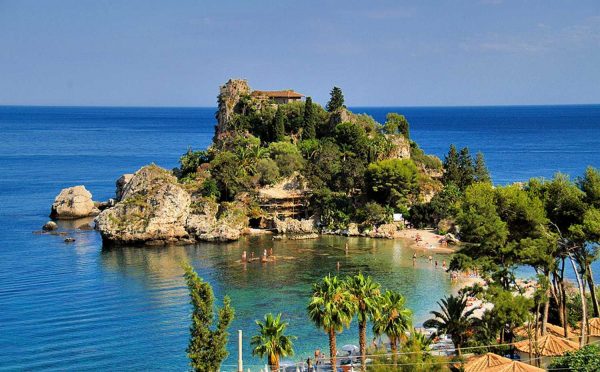 Then, the odeon (odeum), a much smaller Roman theatre, is located near the Church of Saint Catherine (Santa Caterina), which obscures it.

On the site of Saint Pancras Church, just beyond Porta Messina (the Messina Gate) outside the medieval city walls, was a temple dedicated to Zeus, a wall of which was incorporated into the present structure. (Saint Pancras is believed to have been an early priest or bishop of Taormina’s Christian community.)

Another eastern Sicilian example of the phenomenon of temples being converted to churches with the introduction of Christianity is the cathedral of Syracusa.

Indications of Taormina’s ancient street plan are evident, and Roman mosaic floors have been found in the ancient villas in the area.

Even Palazzo Corvaia, built during the fourteenth century, was constructed on Roman foundations.

Taormina has a good archeological museum (near the amphitheatre), though many of the city’s more important finds are housed elsewhere.

Taormina’s streets retain much of their medieval flavour, as do many of the churches and residences.

The city’s “Duomo” is not actually a cathedral (as its name implies), but this Norman-Arab church, built over an earlier, Paleo Christian structure, dates from the twelfth century.

The Badia Vecchia (Old Abbey) is a fourteenth century construction. A medieval Byzantine (Orthodox) mosaic icon of the Theotokos (“Mother of God”) is perfectly preserved in the archway passage under the Clock Tower along Corso Umberto I leading into Piazza 9 Aprile.

There are also some charming Baroque and recent structures.

There has been a British presence, and a charming Anglican church, at Taormina for many years. D.H. Lawrence (1885-1930) lived nearby, and based several of his stories on local events.

The larger castle (in the Castelmola district) overlooks the city. It affords a spectacular view, though it is somewhat distant from Taormina and is not particularly well preserved.

We then return to Palermo!

If you are looking to book:

Contact us to customize your experience in Sicily.
Our travel experts, Vincenzo and I will be very pleased to work at your request and happy to create with you an amazing and unforgettable tour of Sicily.