Piazza Armerina and Agrigento, day tour out of Palermo

Piazza Armerina and Agrigento, an amazing day tour out of Palermo

Today let me introduce you two lovely locations which are also the most popular Archaeological Sites of Sicily, UNESCO, which are combined as a day tour from Palermo: Piazza Armerina and Agrigento

Tour Of Sicily arrange a regular day tour out of Palermo to visit both sites every Wednesday and Sundays at eur 98 per person, arranged in English, Italian and Spanish. Tour details are shown on: https://www.tourofsicily.com/tour/full-day-regular-tour-to-piazza-armerina-and-agrigento-from-palermo/
Private day tours are available on request! 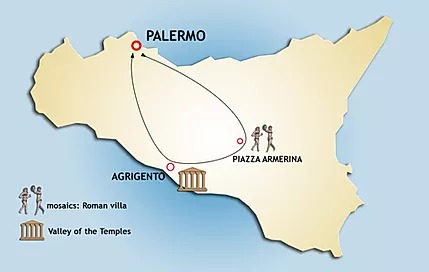 What has always been amazing about the Villa del Casale, from the first excavations in the 1800’s until the final restorations, are “the superb remains of magnificent mosaics and polychrome floors of the splendid villa of the late Imperial Age” (G.V. Gentili).

The very impressive mosaic complex has been the reason to include the villa in the list of Unesco World Heritage Sites making it one of the most important examples of the “Villa” architectural style, which combines on the one hand high-quality residential characteristics and on the other hand functional elements for productive activities related to its rural location.

This Villa is a monument of great historical and artistic value of the late Roman Empire. 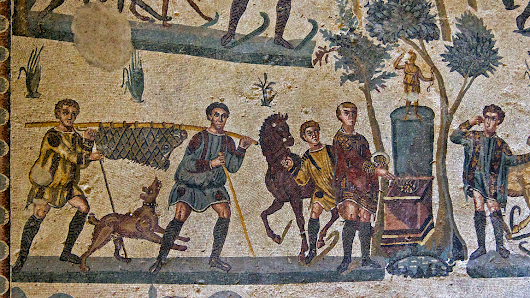 Piazza Armerina, splendid art city woven into the heart of Sicily, boasts a slew of monuments that tell of its glorious past. Meanwhile, the apple of the citizens’ eyes is the Villa Romana del Casale; originally the property of a powerful Roman family, it dates back to the 4th Century A.D.

This majestic Imperial villa, standing tall in the Province of Enna (perhaps the most “Roman” of places on the Island), is a magnificent rural abode, fascinating, above all, for its captivating mosaics, considered the most beautiful and best-preserved of their kind.

The fruits of meticulous labor, these precise yet moving images make for a significant adornment to what remains of this extravagant residence – made a UNESCO World Heritage Site in 1997.

Roman Villa (trans. Roman Country Villa) in Piazza Armerina is considered to be one of the most important exemplars of an official governmental residence, attributed to the elaboration and exceptional beauty of its architectonic and decorative elements.

Dated back to 320-350 A.D., the villa most likely belonged to a member of Rome’s senatorial class, probably a governor of the Eternal City itself (Praefectus Urbi).

Archaeologists undertook an important excavation project in the mid-18th Century, bringing to light 37,674 sq ft of mosaic flooring – figurative and geometric – along with wall mosaics, columns, statues, capitals and coins. The theme of the mosaics?

They are essentially, in part, paeans to the homeowner himself, and they are done, one might add, with a certain profundity and eloquence.

Moreover, much of the house exhibits a definite influence from North African art styles, leading diggers and academics to believe that some of the construction workers from the African Continent.

In the mosaics, the viewer can detect varying styles and narrative cycles: one is dedicated to mythology and to Homeric poems, while another refers to nature and scenes from the Roman aristocracy’s quotidian life.

Four distinct zones have been identified from the villa’s remains: the monumental entrance with courtyard in horseshoe form; the villa’s center, built around another courtyard garden; a large room with three apses (trichora), preceded by an oval peristyle lined by several large niches; and the thermal baths complex. Years-long restoration works centered around the mosaics and murals concluded only recently, in December 2012.

Our day tour continue onto the amazing Agrigento to visit the Valley of the Temples.

Then, the rediscovery of Akragas began towards the end of the eighteenth century, when the first European travellers reached Sicily, discovering an unexpected and immense artistic, archaeological heritage.

In a almost enchanted valley, full of almond trees in bloom, it is the most impressive group of monuments of all of Magna Greece. The unique charm of this site is in this blend of cultural environment and natural landscape.

The Valley of the Temples is certainly the most important testimony of the ancient, classical culture of Sicily. It brings together the temples of gods goddesses as well as the area of the necropolis and sanctuaries outside the walls.

Valley of the Temples is certainly the most important testimony of the ancient, classical culture of Sicily.
Castor and Pollux (Dioscuri),  the legendary twin brothers, born from the union of Jupiter and the queen of Sparta, nowadays has only four columns left and has  become the symbol of Agrigento.
Olympian Zeus (Jupiter)was built to thank Zeus on the occasion of the Agrigentines’ victory over the Carthaginians, in 480 BC. Here are the famous atlases, some gigantic statues with human shape, once used as columns o pilasters.
Concordia, also built around the 5th century, is located along the via Sacra and is one as well of the best preserved temples. In the sixth century it was transformed into a sacred building. The name Concordia comes from a Latin inscription found near the temple itself.
Heracles (Hercules) is the oldest one.  Inside it kept a bronze statue of Hercules himself, which  the Akragantines loved very much. The temple, destroyed by war and natural disasters, today has only eight columns left The temple of Aesculapius was built far outside the ancient walls of the city, a place of pilgrimage for the sick who asked to be healed. The walls of the temple were covered by the words of the sick who obtained healing. The tomb of Theron, near the Golden Gate, is an imposing pyramidal monument made of tuff stone. It was built in memory of the fallen of the Second Punic War.
Vulcano whose ruins suggests it once was an imposing building, dates back to the fifth century.  In its foundations, the remains of an archaic temple were found.
Juno (Hera Lakinia) – Its name, like that of the nearby Temple of Concordia, is conventional as a result of a wrong interpretation of a Latin inscription that  aligns it with the temple of Hera, in Crotone. Placed spectacularly in the easternmost part of this  magical hillside, it housed the cult of the goddess of fertility.
During the afternoon the tour get back to Palermo.

If you are looking to book:

Contact us to customize your experience in Sicily.
Our travel experts, Vincenzo and I will be very pleased to work at your request for an unforgettable tour of Sicily.
Arrivederci!